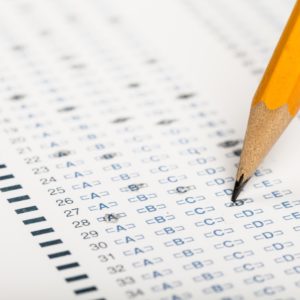 Despite contradictory pending legislative action awarding the creation and implementation of a new statewide assessment to an in-state provider, the Iowa Department of Education (DOE) intends to have a new assessment for the 2018-2019 school year.

House Study Bill 578 passed an education subcommittee during the current 2018 legislative session, and would mandate that a new statewide assessment would be created by the Iowa Testing Program within the University of Iowa College of Education, and be administered across the state by a designee chosen by the program. This legislation comes one year after the legislature and then-Governor Terry Branstad signed a law (SF 240) mandating that the DOE issue a Request for Proposal (RFP) for a new assessment that follows several legislative targets including languages and price tag, and award such a bid for implementation in the 2018-2019 school year.

Staci Hupp, communications director for the DOE said that despite the legislative limbo that the department is currently in, a new assessment to be implemented in the 2018-2019 school year is the department’s goal.

In accordance with SF 240, in September of 2017, the DOE awarded the bid to the American Institutes of Research (AIR), among other bidders ACT Inc., Data Recognition Corporation, Pearson, Questar, and the University of Kansas.

However, while intended to be a smooth process, the Iowa Department of Inspections and Appeals had to step in to deliberate a claim brought forth on behalf of NCS Pearson (Pearson), which alleged that the process by which the DOE and the Department of Administrative Services investigated bids and awarded a contract did not follow the legislative directive that was mandated in 2017.

According to Pearson’s testimony in court documents, the company’s bid was “substantially” lower than all other proposals, due to the fact that the company desired to maintain a close, working relationship with the state by offering it at such a low cost. Pearson’s complaint continued, stating that both the DOE and DAS were required to evaluate and score the proposals consistent with the “plain meaning” of the seven criteria outlined in the legislation, and claimed they did not stick to the letter of the law, choosing to alter the process midway through reviewing the proposals.

The Department of Inspections and Appeals published its ruling this week, confirming the DOE and DAS’ initial award, and ruled that the process was legal and in accordance with the legislation.

This is the sixth year that the state has been in a deliberation process for a new statewide assessment that would finally be in line with the Iowa Core Standards. At the request of Branstad, in 2013, a task force was appointed to find and recommend an assessment that would be in alignment with the state’s standards. The task force settled on the “Smarter Balanced” assessment, developed by a consortium of states and is a test favored by many educators and administrators. However, the assessment comes with an expensive price tag and is lengthy in its implementation. Regardless, the DOE released an RFP for a company to implement the assessment. Before the bids were opened, according to court documents, the Iowa Legislature stopped the process based on the costs associated with Smarter Balanced, and consequently passed SF 240 in 2017, mandating the the DOE find a new assessment to be implemented.

According to Hupp, should the new law pass, the bid awarded to AIR would be revoked. As to whether or not this would lead to legal ramifications for the DOE, Hupp said that the department was “unaware of any.”

According to federal regulations, if any state does not align its assessments with its core educational standards, it is in jeopardy of losing federal dollars. When asked if the state is in danger of losing funds, Hupp said that “the bottom line is that Iowa will change assessments next year. Any new assessment will be subject to peer review.”

Much of the state’s deliberation on a new assessment has been about the total price of the assessments and the quality of the assessments. Many educators favor Smarter Balanced because of the test’s ability to design questions to the skill of the student, rather than creating a standardized assessment. Representative Walt Rogers, sponsor of House Study Bill 578, was reached out to for comment about why a new law for a new assessment is being written while the DOE has already granted an award for the new assessment, but did not respond by publication time.