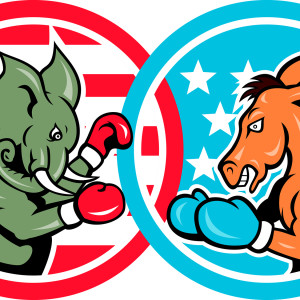 As the country gears up for midterm elections this November, pundits, strategizers, organizers, as well as politicians themselves are bracing for “the blue wave” that stands to heavily contest many Republican-held seats across the country.

As seen in the recent special election victories of Democratic Sen. Doug Jones in Alabama and Democratic Rep. Conor Lamb in Pennsylvania, even Republican strongholds are ill-prepared against a mobilized Democratic base. Though even with an energized base, landslide victories for Democrats are a far from guaranteed occurrence, argues  Iowa State University Professor David Andersen.

Reflecting on the wave of Republican victories in the midterm elections of 2010, Andersen said that in 2018, those once-new Republicans and Tea Party members are now political veterans, which poses a big obstacle for Democrats.

“[Those Republicans] are ready to move up the food chain and it’s going to mean that even though this is a really good year for Democrats in terms of the national mood, [Democrats] are probably going to be putting some weak candidates up against very seasoned Republican office holders,” Andersen said. “That’s exactly why you have to constantly build your bench because you don’t want this to happen.”

Following the defeat of Hillary Clinton to Donald Trump in 2016, the postmortems of the Democratic Party have been one of infighting and factions, as well as a vacuum of leaders trying to pinpoint the unifying direction of the party. With no bench to succeed Barack Obama, Hillary Clinton, and Nancy Pelosi, the party has been unable to contend in key gubernatorial, state legislative, and congressional races.

“Republicans swept public offices throughout America and kind of built on that throughout the Obama presidency and one of the big failures of Obama’s presidency was that he did not work with the party to build back up the Democratic bench,” Andersen said. “So it’s not just that Democrats lost these offices for the remaining six years of Obama’s presidency, it’s that all these young Democrats who could have been holding lower offices and building experience and getting their political resumes together, they weren’t there. So suddenly you have a year like this one coming up that has a ton of potential for Democrats to win political office and they just don’t have the young talent ready.”

Rebuilding the Iowa Democratic Party
Aware of the lack of up-and-coming Iowa Democratic leaders, Jake Braun and co-founder John Murphy organized the Iowa Democratic Elected Officials Association (County IDEA), a Political Action Committee (PAC) devoted to investing resources in Democratic candidates running for county offices. According to a County IDEA press release, the organization aims at rebuilding the state and county parties and developing “progressive community-level leaders.” As of 2017, only 240 Democratic elected officials represent Iowans, while nearly 600 Republicans represent constituents in the majority of Iowa’s 99 counties, according to the PAC.

Through providing foundations for campaigns in the form of earned-media, press releases, consulting on positions for both regional and national issues, social media management, email lists, and video creation, County IDEA hopes to be able to open the possibility for Iowans who don’t have the free time to run a high-powered campaign to be able to not only run for county positions, such as supervisor, treasurer, auditor, but to be able to solidly compete in swing districts.

“I just know that this grassroots stuff works,” Braun said. “And Democrats have really lost their bench over the last decade or so and getting people elected to these offices, especially if you can teach them some of the basics, these are people who then run for state senator, or Congress, or governor, and so using some of these grassroots and net-roots tactics to elect people to these county offices helps improve county government, and also builds a bench that we can pull from to win higher offices in Iowa.”

Braun said that the state party and other organizations really influence and focus on higher offices such as the U.S. Congress, governorship, and key Iowa House and Senate seats, leaving many local office candidates without institutional support. However, Braun acknowledged that supporting local, smaller races that don’t appear to be eye-catching on the surface becomes important when filling out the party’s bench of leaders. Braun highlighted the fact that statewide, Iowa’s key Republican executives were once county elected officials. U.S. Senator Joni Ernst was elected Montgomery County Auditor in 2004 and 2008, before being elected to the Iowa State Senate in a special election in 2011 and re-elected in 2012, before going on to represent Iowa as a senator. Gov. Kim Reynolds served four terms as the Clarke County Treasurer before being elected to the Iowa Senate’s 48th district, before serving as lieutenant governor under Terry Branstad.

Braun is no stranger to Iowa politics, and comes to the PAC with over a decade of experience organizing presidential campaigns for Democrats. In 2003, he coordinated John Kerry’s campaign in northeast Iowa, followed by a 2004 stint in Michigan as Kerry’s field director. He was Obama’s national deputy field director in 2008, then became the White House Liaison for the Department of Homeland Security.

Murphy is a Dubuque County Supervisor, and was formerly senior aide to former Congressman Bruce Braley, as well as to former Gov. Tom Vilsack.

Looking ahead to the 2020 campaign, Murphy and Braun reflected on their experience, stating that county officials’ endorsements were key in determining the outcome in a district caucus in Iowa.

“What we realized is that a lot of times the endorsements and support that elected officials would give presidential candidates that they got behind didn’t really mean all that much,” Braun said. “But for whatever reason, these county officials, their endorsements really mattered. I think it’s because they’re so much closer to the electorate than a lot of higher up the ballot offices, that they kind of get to know who all the activists are who do things in their community and see who would make a good precinct captain.”

Beyond the Iowa Bench
While the “blue wave” might turnout a large swath of voters and contest seats that Republicans once thought were safe, and with Democratic groups across the country recognizing the importance of having a political bench, Andersen said that it still takes roughly six to 10 years before the results of “bench-building” reap results.

“The whole goal of building your bench is that when it comes time for an open seat governorship to be contested for example, you want to be able to choose between three or four really experienced people,” Andersen said. “So, somebody who’s held a state assembly position for two years or four years, that’s not going to cut it.”

However, Andersen said that there’s no better time to begin building the bench than during a wave election, due to the fact that inexperienced elected officials have a chance to begin building a following, gaining campaign experience, fundraising, and learning about the political process.

Across the country, PACs and organizations are preparing for the wave election by putting together initiatives that bring fresh minds to join the political movement of the party.

Left-leaning ballot access group “iVote” will spend at least $5 million over the 2018 election cycle in swing states in order to elect Democratic secretaries of state. According to President and Founder Ellen Kurz, there isn’t a single swing state with a Democratic secretary of state. Since 2010, secretaries of state across the U.S. have instituted new voting policies that Democrats argue repress the rights of voters. iVote will spend its money in the swing states of Arizona, Colorado, Iowa, Michigan, Nevada, New Mexico and Ohio.

Other organizations such as NextGen America and Latino Victory Fund want to recruit and train 200 immigrant candidates in 2018 to increase the presence of Latinos in government to spread awareness in support of DACA. The Democratic Attorneys General Association (DAGA) has a mission to elect Democratic women to half of the state attorneys general seats by 2022.

Nationally, several organizations are working to get Democratic nominees to run for House of Representative seats. The group Indivisible is recruiting Democrats to be politically active and involved about the party’s position on issues, as well as educating members about congress with a handbook written by congressional staffers. Our Revolution, which began during Bernie Sanders’ campaign for president, continues to support new party members to run for office. Additionally, the group New Democracy is focused on building the ranks of the Democratic Party. Rather than relying on coastal Democratic hubs to win elections, the organization’s mission is to get voters on the Democratic side across the heartland and elect more Democrats to local office.