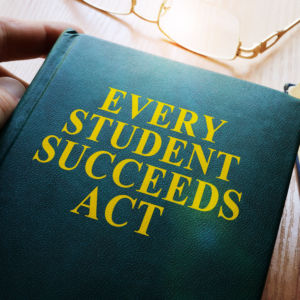 Iowa’s ESSA Plan Has High Standards, but Some Challenges Could Hold Back Achievement

An independent review of Iowa’s Every Student Succeeds Act (ESSA) plan was released today, detailing the state’s goals and standards, as well as intervention plans for handling low-achieving schools. Conducted by Bellwether Education Partners (a national nonprofit focused on changing education and life outcomes for underserved children through improving policy and practice) in conjunction with the Collaborative for Student Success (a non-profit organization working to improve public education through a commitment to high standards for all students), the independent peer reviews analyze all ESSA plans from every state that were submitted to the U.S. Department of Education this past September, as part of the legislative requirements in ESSA, passed in 2015. The plans are required to be implemented in the 2017-2018 window.

Chad Aldeman, of Bellwether, explained that the federal requirements don’t inherently critique the plans that are submitted to them for quality, which is why both organizations conducted their own reviews using the submitted data in the hopes of providing helpful feedback to states as they begin implementing their plans. According to the report, peers met for two days to discuss their individual reviews of the plans and worked together on the collaborative draft. The teams were then asked to use their discretion and expertise to respond to and score each rubric item. Each state was given the opportunity to review the draft peer analysis and to provide substantive additions and corrections.

The rubric can be broken down into nine categories: plan components, standards and assessments, indicators, academic progress, all students, identifying schools, supporting schools, exiting improvement status, and continuous improvement. Iowa’s scores and analysis are listed below under their respective subheads.

Plan Components (Iowa score: 4): The report commends Iowa for putting an executive summary in the beginning of the report, with a detailed five-page explanation of the process by which they arrived at the standards, which wasn’t required under the law but aids in producing a fluid and understandable plan.

The one limiting factor in the plan lies in its ambitiousness, said Aldeman. According to the report, Iowa was using the previous three years’ test scores to dictate its future, mainly that reading and math proficiency has been flat during that time, no matter what student was being tested. Its plan reflects that history of its test scores, expecting average gains of “only 0.5 percent a year.”

The state does expect slightly greater progress from typically lower-performing groups, at a rate of one percent a year (two times the anticipated rate). The report states that even by achieving these targets, large achievement gaps would still remain. The state’s long-term goal is for “only about half of its black students to be proficient in reading and math by the year 2022, compared to 80 percent of all students statewide.”

The report states the plan could be further improved by including established long-term goals that envision equity that is consistent with the state’s expressed guiding principles. According to Aldeman, there was a balance in states choosing high goals vs. more historic goals, based on their respective state data.

Standards and Assessments (Iowa score: 2): The report states that though the state has listed achievable and ambitious goals, the assessment that will test the standards is in transition, which is currently not providing adequate feedback to educators.

“The standards assessments are the building blocks of good accountability,” Aldeman said. “In Iowa, there’s so much still to be determined. [The state] has a request for proposal for assessments. As part of the plan, states weren’t required to put down information in standards and assessments. It’s more so just we think its uncertainty in what it will all look like.”

This past June, the Iowa Department of Education requested proposals for new assessments that meet the state’s new standards. In 2014, a state education task force recommended a switch to the Smarter Balanced Assessments. The test was never selected and the task force’s recommendations were deferred for a possible cheaper, in-state test.

“The state must be vigilant in ensuring that the new assessment adequately measures student learning and growth,” the report said.

The ratings, as the report explains, are on a scale of 1 (“This practice should be avoided by other states”) to 5 (“This could be a potential model for other states”).

Iowa also incentivizes schools to have 95 percent participation in the state assessments, rewarding schools a 10 percent if they reach that threshold, and awarding the school zero percent if they fail to. The report says that this portion of the plan could achieve a higher score if it added more of a consequence for schools that don’t reach the participation threshold.

Academic Progress (Iowa score: 3): The report says Iowa’s accountability system plans include both student achievement and growth, but it is “unclear” about how much weight it will place on students reaching the state’s grade-level standards. Iowa uses a growth model called Student Growth Percentiles (SGP), which compares the progress students make against their similarly performing peers and converts those scores into percentiles. The report says that while the approach is simple to calculate, it doesn’t ensure students master skills by graduation.

All Students (Iowa score: 3): The report claimed that it is difficult to identify specific policies designed to identify, highlight, and address the needs of disadvantaged or special needs students. The state currently has a process for identifying struggling schools based on whether any subgroup of students is performing, on its own, as poorly as the bottom five percent of schools, resulting in the need of targeted support. In addition, if any subgroup has a “zero-to-negative growth trajectory” for three years in its accountability index, that school would also be identified for targeted support.

“The state put down zero to negative growth trajectory,” Aldeman said, “but we’re not entirely clear what that means. When we talked to Iowa they thought it was pretty clear: ‘is the slope of line negative or not?’ We thought it still wasn’t clear.”

Identifying Schools (Iowa score 3): The report says that Iowa is planning to modify the weights of its accountability system over time, and has articulated a clear process for testing new measures and easing them into the standards. As the state transitions to a new set of assessments, many of the calculations used to determine a student’s achievement and growth, and to identify schools, are very much up in the air, which explains the three rating.

Supporting Schools (Iowa score: 2): The report flatly states, “Iowa’s plan for supporting low-performing schools is short and lacks specificity.” As is required by ESSA, the state says low-performing schools will be required to complete a needs assessment that will identify its priority areas, and districts with at least one comprehensive support school must undergo a resource allocation review.

The report argues that while local control over schools is a staple of Iowa education “the state must not allow that argument to stop its responsibility for intervening in situations where students are not being served well.”

Exiting Improvement Status (Iowa score: 3): The report says that Iowa plans to allow comprehensive and targeted support schools to exit only if they’ve demonstrated progress and shown evidence of implementing evidence-based improvement strategies. The report commends the state, saying it will send a positive message to schools cannot merely exit the percentile by leaping over other schools.

The report elaborates, stating the Iowa has a unique proposal for schools that are improving, but not enough to be out of the bottom five percent. For example, if a school identified in 2019 has shown some progress by the year 2022, but not enough progress to escape the bottom five percent of schools statewide, the school would be allowed to exit status. The report recommends changes to this proposal, perhaps resetting the clock on achieving progress.

Continuous Improvement (Iowa score 4): The report states Iowa illustrates its guiding principles in implementing ESSA are that implementation will be done in an “inclusive process that balances various internal and external stakeholder inputs” and that it will communicate frequently with the field. The report gave this final piece of the plan a four because “the plan would be stronger if it included an explicit mechanism for accomplishing this.”