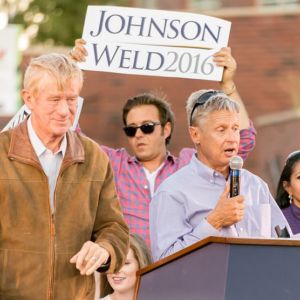 Is Gary Johnson the Only Free Trade Presidential Candidate?

For free trade enthusiasts, they’re hard pressed to find a presidential candidate in the two-party system that supports the Trans-Pacific Partnership.

If you’re a single-issue voter on free trade, then Libertarian presidential candidate Gary Johnson is your guy.

Johnson, the former governor of New Mexico, held a rally on Thursday in Concord, N.H. on the steps of the State House. As he talked about their policy stances on a variety of issues, he made it clear that he and his running mate, former Massachusetts Gov. Bill Weld, support free trade and the TPP.

“We’re the free-trade candidates here and we do support TPP,” Johnson told Michigan reporters in a conference call on Saturday. “We think it really does expand free trade.”

But Johnson’s presidential challengers both have said they do not support the 12-nation trade agreement. Republican nominee Donald Trump has voiced his concerns about the agreement from the beginning and Democratic nominee Hillary Clinton has changed her opinion.

Clinton, who helped originally negotiate TPP during her time as secretary of state, is now opposed to it. However, close allies of Clinton claim that she could switch her stance again if she’s elected into office.

“Both Trump and Clinton are constrained by their bases of support,” said Christopher Galdieri, a political science professor at Saint Anselm College. “Trump won the nomination in part by running against trade, immigration, and other issues where his supporters feel they have been harmed or worse economically. Clinton had to move left on TPP and trade generally to fend off her challenge from Bernie Sanders, and so she’d risk losing votes she needs from liberals and young people if she shifted her position now.

Recent polling suggests that 55 percent of registered voters who support Clinton say TPP would be beneficial for the United States. Only 24 percent say it would be bad.

Even if Clinton supporters, or Republicans, who back TPP were to switch their votes to Johnson, Galdieri said he still has a longshot of the Oval Office.

“If there’s a third party candidate that supports TPP and similar trade positions generally, then I’d agree that that is the only option, at the presidential level, for voters for whom that is their top priority,” he said. “But third party candidates don’t win presidential elections, so any such voter would have to consider whether this issue is really worth driving their vote in this way.”

Douglas Irwin, a professor of economics at Dartmouth College, said the TPP agreement is a top priority for President Barack Obama’s agenda and legacy, so he would want to pass it in the lame-duck session.

“The only real hope is for Congress to do something with it before the next president moves and the chance of that is not looking good,” he said. “If Hillary hadn’t been so strongly against TPP, she might have some wiggle room if she took the office. But now it just puts pressure on getting it done so she doesn’t have to deal with it if she actually is for the deal.”

If Johnson were to also put pressure on Clinton and Trump during the debates, he could bring TPP and free trade as a central issue in the presidential race.

Johnson notes he is polling at about 10 percent, and he needs to poll at 15 percent in the latest five polls to make it on the stage.

“If Johnson were to be included in the debates, he’d want to emphasize the areas where he differs from Clinton and Trump, and this would be one of them,” Galdieri said. “It’s possible this would appeal to business-friendly Republican and Democratic voters who feel alienated from Trump’s populism and Clinton’s moves leftward on trade.”