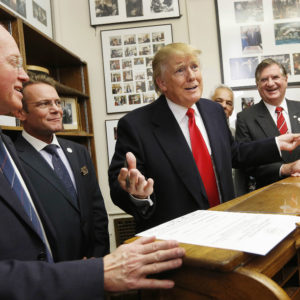 Reports of Donald Trump’s demise have been greatly slightly exaggerated. At least in the Granite State.

In the newest state-by-state polling from Morning Consult, the president’s approval is just one-point shy of his all-time New Hampshire high, and his overall approval is the best it’s been since May of 2017. And while Trump is still underwater with Granite State voters, he has managed to make up more than half that gap in just three months.

When Trump was first sworn in, his New Hampshire poll number’s were 45 percent approve, 44 percent disapprove–the only time in the past two years he’s been above water with Granite Staters in the Morning Consult monthly polling.  In fact, in the fall of 2017 Trump fell underwater by a whopping -19 percent and as recently as this past September, he was underwater by -17 percent.

But in just three months, President Trump has gotten his approval rating back up to 44 percent approve/52 percent disapprove,  and he has cut his negative approval margin to -8 points.  Not great, but his margin is better than President Obama’s in October of 2011, for example (-12), though Obama was at -3 in New Hampshire around this point in his first term.

“Armchair political analysts love to talk about Trump being a one-term President because he is unpopular. This shows his numbers continue to rise and he will very likely be in the same spot Obama was when he began his re-election,” says longtime NH GOP strategist Mike Dennehy.  “Bottom line: anyone who counts out Donald Trump and ignores his ability as a candidate does so at their own risk of looking foolish.”

While New England remains America’s most deep-blue region (the six states have a total of ONE Republican in Congress–Sen. Susan Collins of Maine), there’s an interesting geographic divide: In Maine (45/51 percent) and New Hampshire, Trump’s numbers are at or above his national average of 44/52 percent; but in the other four states, Trump’s numbers are far lower.  Massachusetts and Vermont are tied with California as the states with the lowest Trump approval rating (33 percent), with Connecticut and Rhode Island at a dismal 38 percent.

(DC isn’t a state and is also in a league of its own when it comes to Trump hatred. His December numbers in the District are an abysmal 17 percent approve/79 percent disapprove.)

Meanwhile, Morning Consult also found an 84 percent approval rating among GOP voters, which makes a serious primary challenge very difficult to mount.   The NHGOP is certainly on board: “As our economy continues to soar and as Democrats continue to move further and further to the left, with talk of 70% and higher tax rates, Granite Staters will further support President Trump and the Republicans who have delivered such a strong economy,” says NHGOP Comms Director Joe Sweeney.