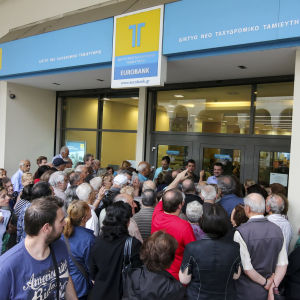 Opinion: It’s All Greek to Me, or Liberals Never Have to Say They Are Sorry

Like many other Americans, I have been following the debt crisis in Greece with some interest.  My expertise is not in financial markets, national debt management or international diplomacy.  The political debate that is swirling around any potential solution is both fascinating and perplexing to me.

One thing is fairly clear in all of the conversation.  Not for a year or two, but closer to a generation or more, Greeks have been enjoying benefits bestowed upon them by their government that were underfunded from day one.  Who wouldn’t want to live in a country where retiring at 45 was the norm, where month long vacations were automatic, where so much was just “free?”  From where I sit, the view is that the government never had the money in the first place to justify going in this direction.

Politicians serving at the mercy of an electorate accustomed to living the life of luxury decided their survival depended on propping up this house of cards for as long as possible.  How?  They borrowed and borrowed and borrowed and borrowed to pay the bills for all these supposedly “free” wonders.  As an aside, I’d like to offer the suggestion that all governments cease and desist from describing anything they are providing to the public as being “free.”  Instead, the requirement should be to tell the public:  “This benefit is being provided to you as a result of taking money from others to pay for it.”

Fast forward a bit.  The Greek debt mounts and mounts.  Over time, the economy deteriorates to the point that not enough tax dollars are generated to even service the debt (pay the interest).  Shockingly, those owed the money actually want it.  In an effort to get the books in balance, an “austerity” program is launched to reduce spending, lower benefits, and increase taxes to enable the owners of the debt to be placated.

Does all of this sound reasonable to you?  Probably, since Americans have no expectation of retiring at 45 or any number of other things normal to Greeks.  You can predict in advance that austerity programs will inflict hurt.  In the short term, lower government spending and higher taxes actually slow economic growth.  However, in a culture where sacrifice today for a better future tomorrow is truly foreign, the public rises in indignation and demands the debt they have piled up be “forgiven.”  This attitude is labeled as “populism” by the mainstream media.

Populism?  How about escapism?  By what logical or moral argument does the demand by those who have incurred a debt to have those holding that debt to forgive that debt become reasonable?  In Greece, it would seem, the demand is:  By God, we will damn well have that lunch be free.  What they mean, of course, is that it is free for them, because those they promised to pay for it are supposed to just forget about getting the money.

There is a reason for all of this to be important to Americans.  For years and years and years, liberals have told us that we have the “right” to expect this, that and the other.  That benefit can either be something provided directly by the government or a requirement imposed on the private sector.  We are told that when we “invest” (liberals love that word in preference to the ugly notion of “spend”) in this, that and the other, the economy will actually grow faster, generate more revenues, etc.   Having passed eighth grade math, along with the rest of the experts, I can actually look at our books.

Whether it is Social Security, Medicare, Medicaid or any of the other monster programs, like the Greeks, we don’t have the stomach to collect enough in taxes to actually pay for these benefits Americans love and now count as automatic and their right.  Instead, we pile up debt—just like the Greeks.  Anybody seeing a pattern in any of this?

In less than a generation, simply to sustain the benefit level currently in existence for Social Security, it will take one worker for every retiree.  Who in their right mind thinks that can happen, much less be sustained?  Yet, any politician who suggests tinkering with the sacred cows of Social Security, Medicare, or Medicaid is instantly the subject of vicious attacks.  Liberals continue to tell us the problem is not that we spend too much, it is that we tax too little.

We live in a country where the trivial too often becomes the important.  The reality is that somewhere between 80 and 85 percent of Federal Budget is captured in three categories—interest on the debt, defense spending, and entitlements (largely Social Security, Medicare and Medicaid).  To watch the debate, you would think the solution to the imbalance between what we spend and what we collect in taxes could be solved by either ceasing to build bridges to nowhere (the conservative view) or taxing millionaires just a little more (the liberal view).  Of course, as the numbers show, neither approach has any promise of solving anything.  Only by being honest about the three categories that are consuming so much of our spending will we get anywhere.

If liberals were at all serious about the budget, they would join together with the rest of us in good faith and common cause to help determine the most fair, least harsh, and best way to deal with the hard fact that we cannot continue to spend as much as we do in the way we do for the things we do.  Just as happened in Greece, there will be a day of reckoning.  Worse for us, our debt is increasingly in the hands of the Chinese.  It is beyond wishful thinking to hope that China will show a shred of mercy when it comes to getting what they lawfully have the right to expect is coming to them.

We may shrug our shoulders, or even show a smile, when looking at the situation in Greece.  What we ought to be doing is looking in the mirror and accepting the reality that unless things change, change fairly soon, and change dramatically, we are only living on borrowed time.