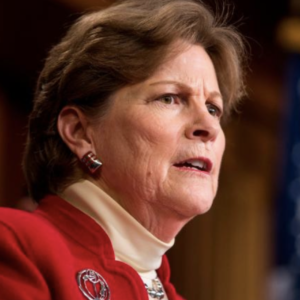 Sen. Jeanne Shaheen is one of the most respected politicians in New Hampshire and, it’s safe to say, in the northeast.

New York’s Rep. Alexandria Ocasio-Cortez may inspire eyerolls over the Green New Deal and Boston Rep. Ayanna Pressley might promote “unrest in the streets,” but Shaheen has earned a reputation for moderation and level-headedness in her 30-year career.

So, why is she promoting a debunked conspiracy theory from the fever swamps of the internet about a Trump plot to use the postal service to steal the election?

On both her official and campaign Twitter feeds, Shaheen is pushing the meme that Trump has a plan to “sabotage the Postal Service.”

In another message, Shaheen warns, “The President is holding the USPS hostage for political gain, and it’s going to have consequences for the right to vote.”

“We have to fight back,” she added.

Shaheen tweeted out a news story about the Manchester mail processing center shutting down 20 percent of its mail sorting machines, with the ominous warning: “This is unacceptable. The admin’s attempt to sabotage the USPS is hurting our veterans and seniors who rely on the mail to get prescription drugs delivered.”

“@USPS is the only federal agency mentioned in the Constitution,” Shaheen insisted in another tweet. “More Americans than ever are relying on mail to conduct business, get prescription drugs & exercise their right to vote. We cannot — & will not — let President Trump dismantle the Postal Service. #DontMessWithUSPS,” Shaheen warned.

“Dismantle the Postal Service?” That claim has as much factual basis as GOP warnings that Democrats intend to “defund the police.”

Shaheen’s statements are sheer nonsense. And given that they’ve been repeatedly debunked by Democratic-friendly media outlets like USA Today, Shaheen almost certainly knows it. So, why is she jumping on board this crazy train, alongside less-than-stable celebrities like Marianne Williamson and Alyssa Milano?

“Nationally, the number of collection boxes declined by more than 12,000 in the past 5 years,” the Post Office wrote in 2016 — during the Obama administration.

Is it really a surprise that, with mail volume dropping by half, four of the 20 mail sorting machines in Manchester would be re-purposed or even sold?

The result of these plunging volume numbers is a financial fiasco that Shaheen and her fellow members of Congress have seen coming for years, but refused to fix.

The Post Office has lost $78 billion since 2007. The General Accounting Office estimates the USPS is now $161 billion in debt, the vast majority coming from its notoriously-generous retirement benefits.

No wonder the current postmaster general is ordering a reduction in overtime and shutting down some facilities.

And yet Shaheen has opposed reforms, like dropping Saturday delivery, that could save the postal service billions.

As for Shaheen’s suggestion that Trump is somehow undermining the mail system to influence the November election, that tin-foil-hat theory doesn’t survive simple scrutiny or basic math.

Here’s Nick Gillespie of Reason Magazine with the math part:

“Assume, for the sake of argument, that the same number of votes will be cast this year as in 2016. Even if all voters used the mail and posted their ballots on exactly the same day, that would comprise only 30 percent of the amount of mail the USPS says it processes every single day.”

But even if Trump did have a nefarious plot to slow down the mail, even if every blue mailbox were pulled off America’s street corners, how would that stop people from mailing in their ballots?

The white truck is still going to pull up to the end of your drive. If you’re worried about slow or unreliable mail service (a fear hardly exclusive to the Trump era), just mail your ballot a couple of days early.

Despite Shaheen’s specious claims, the threat to November’s election isn’t in the mailbox — it’s in the polling place. It’s not mailing the ballots, it’s counting them once they arrive. That’s why two congressional races in New York still haven’t been called six weeks after the vote as officials struggle to process the mail-in ballots they received.

Many observers fear that, between COVID-19, a surge in voting by mail and potentially close races in swing states like Pennsylvania and Wisconsin, it may take far longer to determine a winner in November than usual. And the longer that process takes, the more Americans may doubt whether the election was fair.

President Donald Trump is widely criticized for stoking suspicions that undermine Americans’ confidence in their democracy.

Why is Sen. Jeanne Shaheen doing the same thing? And why isn’t she being criticized for it?

The senator and her staff declined requests for comment.