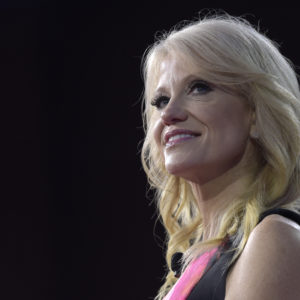 Last February, Madeleine Albright suddenly appeared in more headlines than she had in decades after a poorly phrased pro-Hillary quip. “There’s a special place in hell for women who don’t help each other.” The feminist site Jezebel, it seems, has yet to get the message. The site claims to offer “Celebrity, Sex, [and] Fashion” for women without airbrushing any of the sordid details. Although certainly left of center, it generally focuses on celebrity gossip, fashion advice, and trashy sex advice, with a dose of grrl power. All that changed with the election of Donald Trump. Kellyanne Conway may be the first woman to manage a successful presidential campaign, but in the eyes of Jezebel, she is a traitor to her gender and does not deserve the protections of feminism. Feminists owe Conway nothing.

A piece by Jezebel writer Stassa Edwards made the point bluntly. “I’m not certain that expending energy on defending Conway is in the best interest of ‘all women,'” Edwards wrote, “or if it’s simply in the interest of maintaining the sanctity of the white feminine body.” Translation: Conway doesn’t deserve the respect of liberal feminists because her politics and style differ from theirs.

Edwards’s article rejects the idea that feminists owe Conway “graciousness.” Instead, everything about her is fair game for critique. After a cursory acknowledgement that “there’s no question that people have said sexist things about Conway,” Edwards joins their number, arguing that her association with Trump makes Conway fair game.

“There seems to be a particular demand here, to ignore Conway’s role as an integral member of an oppressive administration in order to extend both kindness and solidarity at the expense of everything else,” she writes. According to Edwards, to accept Conway would make her somehow as complicit in the Trump administration as his former campaign manager.

Ironically, part of the problem appears to be Conway’s style. It seems that feminists can’t wear sleeveless dresses and style their hair long over a certain age. If they do, it opens the wearer to a set of critiques about her body and the argument that she is using it to make a political statement. In fact, to Edwards, Conway’s body is somehow part of Trump’s messaging, as though she were a doll dressed by a puppeteer and sent out on stage.

“The presentation of the body, particularly Conway’s representation of herself as trenchantly feminine, is by no means neutral,” Edwards argues. Calling the deployment of the body (whatever that means) “central” to Trump’s worldview, she describes it as “the greatest challenge to feminism.”

It’s clear that, as Edwards sees things, feminists owe Conway nothing, not even their respect, because of comments her boss made in the past.

How did what Conway put on her own body suddenly become a deployment of Trump? Here Jezebel demonstrates that its commitment to female empowerment is linked to a set of political views.

Like many women’s magazines, Jezebel generally pushes stories that encourage women to have a positive body image of themselves. For instance, Edwards’s piece was joined on the homepage by an article about a woman who learned to “[accept] her nice big ass.”

Not so for Conway, whose inauguration coat was highlighted by a story under the headline “Haha What the F*** Is Kellyanne Conway Wearing?” She has also been compared to “Skeletor” and criticized for her “coy girlishness.”

The piece reveals a latent tension in contemporary American feminism.

“The definition of feminism is technically clear, but the feminist movement is often not,” says conservative writer Mary Katherine Ham. “It’s about the choice to treat one’s body as one wants until one’s choice is to wear a dress and work a job feminists don’t like.”

“These tepid denunciations of sexism, which morph into justifications of a more tepid form of sexism, are just another example of how the target is in constant motion for being a good feminist,” she continued.

It’s a critique leveled by both sides.

“Misogyny, it seems, remains a bipartisan exercise,” wrote Susan Chira in the New York Times. “Whatever legitimate criticisms can be leveled at each woman, it’s striking how often that anger is expressed using the same sexist themes, from women as well as men.”

To Chira, critiques of Conway’s hair and sleeveless dresses are on par with right-wing snips at Hillary Clinton’s pantsuits and flats. Each reflect an insecurity with the idea of women in positions of power, particularly when the woman in question has differing political views.

Jezebel has decided that feminists owe Conway nothing and she is unworthy of their respect, let alone support. So far Albright has not said anything about where that leaves the online magazine.