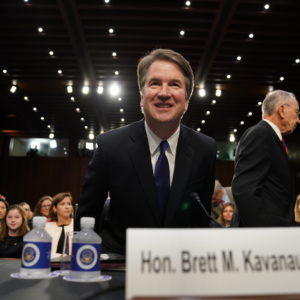 From shouting matches to arrested TV stars–has there ever been a hearing on a Supreme Court nominee like the one Americans saw Tuesday morning?

“It seemed unprecedented to me,” Christopher Scalia told InsideSources, just moments after the first day of hearings ended.  Scalia, son of legendary Supreme Court justice Anthony Scalia, is the co-editor of the book “Scalia Speaks,” a collection of his father’s speeches and commentary. “I haven’t watched every single moment of every SCOTUS confirmation, but I follow them pretty closely and I’ve never seen anything like it.”

“Chaos Descends” was the Reuters headline, though it didn’t “descend”  so much as it was unleashed by Senate Democrats and their allies.  Senate Judiciary Chairman Charles Grassley (R-IA) was literally unable to finish his first sentence before Democrats on the panel started interrupting, and they continued to interrupt–at least 44 times in the first 40 minutes, according to one count.

The Democratic senators worked off a script, using pre-written talking points in their interruptions to make pre-planned allegations over alleged “hidden documents” and a lack of transparency. NBC News reported that it was part of a coordinated effort by Democrats to derail Kavanaugh’s nomination by derailing the process—a report that Senator Dick Durbin (D-IL) confirmed during the hearing.

“Democrats plotted coordinated protest strategy over the holiday weekend and all agreed to disrupt and protest the hearing, sources tell me and @frankthorp,” NBC News’s Kasie Hunt tweeted just after the hearings started.  “Dem leader @chuckschumer led a phone call and committee members are executing now.”

And the senators had allies in the crowd, too.  During the hearings, the far-Left feminist group @WomensMarch tweeted “We’re disrupting the Kavanaugh hearings every few minutes, with hundreds of women prepared to get arrested to prevent these hearings from moving forward.”

And sure enough, one by one protesters in the audience leapt to their feet, screaming at Judge Kavanaugh and the committee. Among the (at least) 22 people arrested was “Covert Affairs” TV star Piper Perabo and notorious anti-Israel activist/Louis Farrakhan advocate Linda Sarsour

It was, as Sen. Ben Sasse (R-NE) put it, an “overblown, politicized circus.”

Watching that “circus,” it’s hard to believe that Justice Scalia, one of the most controversy-inspiring justices of the past century, was approved, quietly and without protest, by a vote of 98-0. That won’t happen now, Christopher Scalia says, because Democrats have decided to openly pursue their “outcomes”- focused strategy for the courts.

“It’s interesting,” Scalia said. “At the beginning of the hearing, Senate Democrats were so emphatic about following the right process, that the process of handing over documents [regarding Judge Kavanaugh] wasn’t being followed. But when it comes to judging itself, they’re much more focused on results.”

“Nobody mentioned, for example, that a few years ago, Judge Kavanaugh ruled in favor of Emily’s List, a pro-choice organization, and their rights when it comes to raising money. Today, that same group is trying to keep him off the bench and their spending that same money against him.  He ruled, not based on the outcome—whether you like or don’t like Emily’s List—but rather on the law,” Scalia said.

Debates over judicial philosophy are nothing new for Supreme Court appointments, but Tuesday’s “overblown circus” was something never seen before. (When asked for a comparable story from history, a spokesperson for the Supreme Court Historical Society offered Roger B. Taney, the Chief Justice who would write the infamous Dred Scott decision, before demurring: “People didn’t show up to protest like this in Andrew Jackson’s day.”)

And while both sides blame each other, the last four Democratic appointments to the Supreme Court received an average of 20 “no” votes, while the last four GOP nominees received nearly twice as many—39.2– from Democrats.

Scalia believes Senate Democrats have painted themselves into a partisan, progressive-base corner due to a failure in their strategy.

“We’re here in part because Democrat’s followed a silly strategy with Gorsuch,” Scalia said. “They foolishly made it clear that they were going to filibuster Gorsuch, who was clearly qualified, and so Republicans used the ‘Reid Rule’ to end the filibuster for Supreme Court nominees.”

“As a result, Democrats can’t filibuster, but they’ve got to show the base that they’re listening, that they’re speaking for the ‘Resistance.’ In some ways I can’t blame [Senate Democrats] for doing it. They don’t have any good options and their base won’t accept any less.”

Will the senate ever return to the days when Supreme Court justices were simply measured on their merit? Scalia doubts it, and he quotes from his father’s own words in “Scalia Speaks:”

“What I urge is a return of the courts to the traditional role that, until the last third of the 20th century, made the application of outcome-based politics in the appointments process the rare exception, rather than the rule,” Justice Scalia said.  “Unless that occurs, I fear that the independent and non-political nature of the federal judiciary will be permanently impaired.”