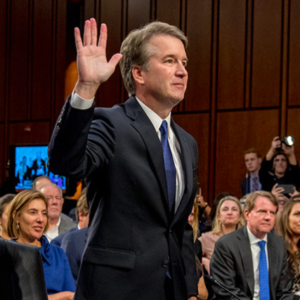 Kavanaugh Delivered. Now the GOP Base Expects Republicans to Do the Same

At a gathering of DC Republicans before the Dr. Ford/Judge Kavanaugh hearings, the leader of a major conservative organization and George W. Bush insider acknowledged “Bush would have dumped him by now.”

Around that same time, at an event in Durham, NH sponsored by the conservative group Americans for Prosperity, grassroots GOP activists were making their feelings perfectly clear: The Republicans better deliver on Kavanaugh—or else. “If they don’t get this done, then they’re done,” Dr. James Betti of Dover, NH said.

In South Carolina, where Sen. Lindsey Graham is often dismissed as “Lindsey Graham-nesty” by grumpy grassroots Republicans for his work on a grand immigration bargain, their senator is being cheered as a hero for denouncing the treatment of Judge Kavanaugh.  “Senator Graham’s coming out fighting to save a man and his family from total destruction hit solid with a very skeptical base,” says Warner Wells, a conservative activist in Columbia, SC.

From radio talk host Eric Erickson in Atlanta (“A vote against Kavanaugh is a vote for Chuck Schumer as Senate Majority Leader”) to Peggy Nance of Concerned Women of America (“The left destroyed their own credibility with outrageous antics from the very beginning”) conservative activists are making it clear that the GOP’s base expects the outcome of the emotional, hyper-partisan confirmation hearing on Thursday to be the swearing-in of Brett Kavanaugh as the next Associate Justice of the Supreme Court next week.

And they won’t take “no” for an answer.

In part, this is Trump voters rallying to their president’s appointment.  While many critics complained when President Trump commented on the credibility of Dr Ford’s accusation—certainly a non-traditional approach for a sitting president— the president’s decision to inject himself into the fray sent a message to his supporters that the Kavanaugh fight was a proxy battle in the ongoing war between Trump and the Democrats.

When Trump tweets “The Democrats’ search and destroy strategy is disgraceful and this process has been a total sham and effort to delay, obstruct, and resist. The Senate must vote!,” he is both speaking for the base and speaking to them.

Then there’s the impact of Judge Kavanaugh’s appearance before the committee, which connected with the Republican base on two levels:

First, Judge Kavanaugh’s combative performance demonstrated to the base—which has made it clear they’re in the mood to rumble—that he was in it to win it.  One reason GOP primary voters chose Trump over 16 qualified, establishment politicians in 2016 is their belief that their party is led by timid politicians more comfortable losing politely than doing what it takes to win.

Another reason Kavanaugh’s support has solidified is, in this process, the judge has become a stand-in for the GOP base.

At first blush, a private-school Yale grad who spent his life in Washington, DC would seem an unlikely embodiment of the GOP Everyman. Then again, so would a rude, thrice-married billionaire from New York City.

But who is the Brett Kavanaugh many Americans have met during this debate? A middle-aged white guy who goes to church, coaches basketball and, to quote the judge himself, “likes beer.” All that’s missing is the #MAGA hat.

Watching Kavanaugh being grilled over fart jokes in his high school yearbook and accused of being a sexual criminal because he got drunk in college, it’s not hard to imagine many men of a certain age (and the women who love them) thinking “There but for the Grace of God…”

It’s not a coincidence—or a surprise—that 61 percent of GOP men believed Judge Kavanaugh was telling the truth before the hearings began. But it might be more surprising Republican women believed him by a 57 percent to 6 percent margin in the same NPR/PBS/Marist poll.

The political world is focused on moderate GOP senators Susan Collins of Maine and Lisa Murkowski of Alaska. They’re not darlings of the conservative movement and never will be. But they will both need their party’s base to turn out in 2020 when they’re up for re-election in swing states. That base is sending clear message in the wake of Kavanaugh’s impassioned performance: They agree with Sen. Lindsey Graham.

“To my Republican colleagues, if you vote no, you’re legitimizing the most despicable thing I have seen in my time in politics.”