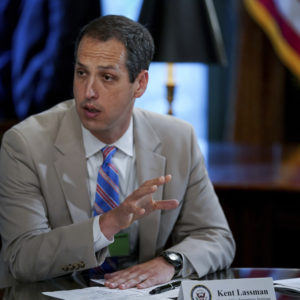 InsideSources continues its series of interviews with leading policy professionals in the nation’s capital. We’re speaking with the leaders of think tanks, trade associations, and advocacy organizations, along with government officials, to learn more about their work and their interests outside of politics. Today’s interview is with the Competitive Enterprise Institute’s Kent Lassman.

Kent Lassman began his career asking how policy affects real people. A question that has led him on a critical journey through the heart of politics.

Lassman serves as the president of Competitive Enterprise Institute, a free-market think tank. His drive to figure out the real-world implications of policy found a home at the organization, which has long focused on the same question. It also led him to become part of an advocacy group that seeks gender equality in sports.

Lassman took on his role as a think tank leader in April 2016. He was just barely into his second day when the organization was subpoenaed by the attorney general of the U.S. Virgin Islands. Lassman recounted the experience and how his life exploring the effect of policy led him to that point.

“I was at a lunch in our conference room, an off-the-record brown bag lunch,” Lassman said. “I excused myself about halfway through, got up to leave. I’m going around the back hallway, around the corner, and our general counsel says, ‘Hey, you need to come in here and look at this.’”

Lassman at the time was speaking with regulators on how to improve federal policy. The meeting was an opportunity to improve regulations so they have a better effect on people. Those ambitions were interrupted when his general counsel informed him that the organization had been subpoenaed.

“We had just been served within the last hour with a subpoena from the U.S. Virgin Islands by the attorney general for 10 years of CEI’s documents, records and materials on one field of study, a large field of study for us,” Lassman said. “And the origin date on that 10-year span was 1997.”

The subpoena was part of a campaign of top law enforcement officials who claimed to be aggressively protecting and advancing policies that combat climate change. CEI contested the whole thing was a blatant attempt to intimidate and silence those who disagreed with the Obama administration on the issue.

“I don’t know if you’ve ever gone through an investigation of any sort, but they’re just grueling,” Lassman said. “I just looked at that document and thought, all those plans I made, everything just went out the window. And that’s where we started from on that second day.”

Lassman and the organization banded together and mounted a defense. His time prior in the research and public relations worlds provided him critical lessons that helped him tackle the legal challenge and pursuit of good policy. Lessons that began like many others in Washington, with an internship.

Lassman at the time was a student at Catholic University. His drive from the start was a passion for learning and challenging his own limits of understanding. His first political internship in 1994 was with the Progress and Freedom Foundation.

“When I went in for the final interview, they gave me homework,” Lassman said. “I walked away from that thinking, hands down, that’s the one I want. I want to be at a place where they force me to learn more than I thought I could learn.”

His passion to learn eventually led him to explore the real world effect of policies and abstract political ideas. The very pursuit that has been a defining characteristic of his career since. Lassman knew policies had consequences and thus the effect they had on real people always had to be taken into account.

“I started in think tanks and that’s where I got my first exposure, and things proceeded from there,” Lassman said. “Eventually I was hired to do research, eventually I finished school, eventually life proceeds. The traditional career track where you see people move from job to job and take on increasing responsibilities and whatnot. That was the start.”

Lassman went onto become a researcher at Citizens for a Sound Economy. Billionaire businessmen Charles and David Koch founded the organization with the intent of helping grassroots activists fight for free markets and limited government. It eventually split into FreedomWorks and Americans for Prosperity.

Lassman spent almost a decade and a half in the think tank world before deciding on a temporary career change. He was hired at the public affairs firm DCI Group. There Lassman helped business owners avoid the same type of legal challenges he would one day face upon his return to the think tank world.

“I took a change in career path,” Lassman said. “There’s probably no one reason why anybody does that. But it was, again, it sated that inner desire like, ‘Can I keep learning?’ Is the degree of difficulty going to go up so that I am psychologically rewarded? Work will be hard, and fun, and interesting, and I’ll learn new things.”

Lassman spent eight years in public affairs before being drawn back into his original career path. Like the tribesman of the archetypal hero’s journey, he returned home with new knowledge that helped him become a leader. He was to become the president of CEI.

Lassman has spent the last year and a half in his current role exploring ways to exemplify what CEI was already pursuing. His focus on real world policy implications found a home at the organization, which revamped its research into technology, communications, and finance under his leadership.

“There’s a lot you can do to prepare,” Lassman said. “However, I think it would be disingenuous to tell you anything other than I was asking for faith that I was going to step into a steep learning curve and come out on top of that curve. As much as you can prepare to lead an organization, there’s more you can’t prepare for, you just need to do.”

Lassman also stresses the importance of life outside politics. How people across the country have passions, families and communities that don’t revolve around the inner workings of Washington. His passion for competitive racing has helped him achieve that balance when it comes to his own life outside his career.

“Tonight I have a dinner for work on Capitol Hill and afterward I’ll come back here. In that bag over there I have everything I need. I’ll run home. So I’ll do a run commute,” Lassman said. “The activity of a long bike ride, of a long swim, it’s one of the very few places, and the predominant place, where I can clear my mind.”

Lassman has participated in several marathon ocean swims, an ultramarathon, and triathlons. He ran an extreme triathlon in Alaska just last month. He’s also preparing for an Ironman race in a couple of months. He came in third place a year ago in a race in which hundreds of participants swam around Key West in Florida.

His participation in competitive racing and career caught the attention of an advocacy group that fights for equality in triathlons. TriEqual started by raising awareness for the unfair treatment professional women face at major competitions. Lassman was asked to be on the group’s board around when it launched in 2015.