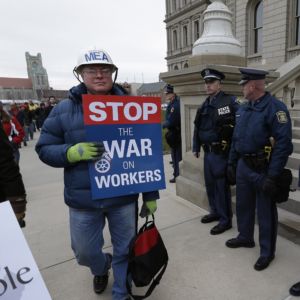 The Sixth Circuit Court of Appeals ruled Nov. 18 that counties in Kentucky could enact their own right-to-work laws. The decision may also allow localities in other states to do the same. Labor union challengers filed a motion to vacate the decision, but the request was denied on Wednesday.

The United Auto Workers Local 3047 filed the lawsuit with the intent of making all the local ordinances void. The lawsuit contested that only states had the authority under federal law to enact right-to-work. The union filed its motion to vacate the decision in response to the state enacting its own right-to-work law Jan. 7.

“The court further finding that the appellees have failed to show the existence of other unusual or equitable circumstances that would mandate or even counsel in favor of relief,” the circuit court decision states. “Now therefore, the motion to vacate and remand is denied.”

Local 3047 argued the case is now void since every county is covered by the state law. The circuit court denied the request because the decision still has implications in other states. The decision essentially set a national precedent for future challenges since the sixth circuit is the highest court to rule on it.

“The union knew that the national implications of that decision would have left it in bad shape,” ProtectMyPaycheck founder Brent Yessin told InsideSources. “So if they could wipe the decision off the books, it’s still published and you can still get it, but it would say vacate and it doesn’t have the same precedential value.”

ProtectMyPaycheck is a legal defense fund which has been helping the county effort. Labor unions tend to be highly opposed to right-to-work laws. The policy outlaws mandatory union dues or fees as a condition of employment. The decision could mean localities in other states can now pass similar laws.

“I think it was important that the sixth circuit leave its decision in place because it is now the guiding light to all the other circuits, and every locality that considers whether this is permissible or not,” Yessin said. “The sixth circuit is the highest court that has ruled specifically on this issue.”

States typically decide whether to enact the policy, but the county ordinances changed that. Warren became the first county in the entire country to enact right-to-work back in December 2014. About a dozen other counties in the state soon followed. Hardin County became the subject of the union lawsuit not long after.

The Kentucky counties were able to pass the law because the state has what is known as a home rule statute. The statute allows counties to pass their own economic development laws so long as it doesn’t interfere with existing state law. Many other states have home rule statutes or similar policies that delegate certain powers to towns, counties, and other localities.

The statewide right-to-work law also left thousands of workers in a contract gap. The union argued its lawsuit was now void because the state passed right-to-work. The first county ordinance, however, was passed nearly two years earlier. Union contracts signed before right-to-work laws are enacted stay in place until they are renewed.

Local 3047 and other potential challengers don’t have too many options left. They could appeal to the U.S. Supreme Court, but that would be a highly risky endeavor. A loss would mean that the highest court set its own precedent that would further support local right-to-work.

Local 3047 did not respond to a request for comment by InsideSources.