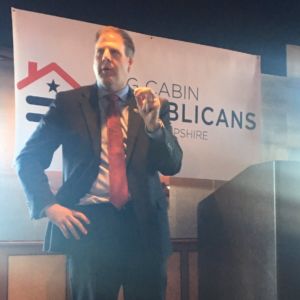 There’s a new political organization in New Hampshire, and it’s hoping to show that the Republican Party is inclusive of all people. It’s often a talking point for the left that the GOP is not welcoming, but the newly-founded NH Log Cabin Republicans wants to change that.

“We want to show that the Republican Party is inclusive and not this monster that we’ve been painted as across the country,” said Adam Lord, chairman of the NH Log Cabin Republicans. “We wanted to show the country this is how we do things in New Hampshire.”

The New Hampshire and Indiana chapters launched around the same time, bringing the national organization’s total to 51 chapters in 27 states and the District of Columbia.

“The leadership teams of our newly minted New Hampshire and Indiana Chapters are organizing dynamos with keen political instincts,” he added. “I expect big things are in store for Hoosiers and Granite Staters alike as, together, we continue to make the case for common-sense conservative principles and LGBT inclusion in the GOP.”

Sununu was the keynote speaker for the New Hampshire launch and his message focused on how the mission of the Log Cabin Republicans aligns with the goals of the state Republican Party.

“When you talk about things like the LGBT community, or talk about diversity…let’s remember: when we stay together, we have that momentum,” he said. “When we’re talking about what we’re doing here tonight, what the Log Cabin Republicans represent for the state of New Hampshire — frankly, represent for the entire country — is a team effort, staying together.”

That message is crucial for Republicans in the State House. Throughout the legislative session, there has been a very public display of the division in the GOP. The state budget debate in the House largely failed due to conservatives siding with Democrats to go against the House leadership’s wishes. The New Hampshire Democratic Party (NHDP) hopes to capitalize on the divided caucus in the 2018 elections in order to take back the Corner Office and get majorities in the legislature.

“We want to help Republicans win elections and create an outlet for LGBT candidates to go to the party and say these are the values we stand on,” Lord said. “A lot of the higher Republican officials said ‘we are ready to talk about this.'”

A major criticism from the NHDP is that the Log Cabin Republicans identify with a platform that is anti-same sex marriage.

@NHLogCabin So you concede that Sununu, Morse & Jasper are LGBT opponents who need educating.. Our party already fully supports what you push GOP toward

The NHGOP platform states that the party recognizes “marriage as the legal and sacred union between one man and one woman as ordained by God, encouraged by the State, and traditional to humankind.”

In her parting speech in January, former NHGOP Chair Jennifer Horn called for the NHGOP to drop its opposition to gay marriage.

“The next time we gather to review our platform, we must preserve our voice as the party of equal rights for all and remove the language that opposes the right to marriage for all people,” Horn said before the state committee voted for Jeanie Forrester to succeed her as chairman.

“But we cannot be the party of individual rights, limited government interference, and personal responsibility while at the same time advocating to deny rights to any individual just because they are gay,” she added. “Here in New Hampshire, our party has hired gay staff, nominated gay candidates, and elected gay party leaders. Let us make this right, not because it is politically correct, but because it is the conservative thing to do, and it is the right thing to do.”

Lord agreed that there are aspects of the platform they would like to change, including its definition of marriage, but the NH Log Cabin Republicans recognize that it could take some time before substantial change is made. His goals for the group include being officially recognized by the NHGOP’s state committee and to get the word out across the state, by going to various town GOP committee meetings, that the organization is open for business.

“You don’t have to be gay to be part of our organization. We are still conservative,” he said. “Just because we don’t identify with one aspect of it [the platform], we can still be a socially liberal, fiscally conservative part of the Republican Party.”