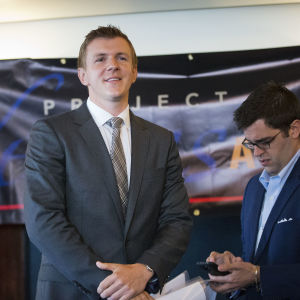 The AFL-CIO has had deep connections to a network of organizations now embroiled in an alleged scandal involving violent election practices.

The AFL-CIO is one of the many union clients of the political consulting firm Democracy Partners. The consulting firm was cited in hidden camera footage Monday for allegedly sending people to instigate violence at rallies for Republican nominee Donald Trump. One strategist in the video notes unions are helpful in executing the scheme.

“A lot of people especially our union guys, a lot of our union guys, they’ll do whatever you want,” Democratic political strategist Scott Foval said in the footage. “When I need to get something done in Arkansas, the first guy I call is the head of the AFL-CIO down there.”

Project Veritas, a right-leaning activist journalism organization, released the footage following an undercover investigation into the groups. Democratic strategists appear to admit in the video to sending people to the rallies to cause trouble. They are trained to incite violence or make Trump supporters look bad for Democratic nominee Hillary Clinton and the Democratic National Committee (DNC).

Democracy Partners leadership consists of many former union officials. Democracy Partners President Mike Lux previously worked for the Iowa AFL-CIO in the early 1990s. Its philanthropy director Ken Grossinger did legislative field operations for the union over the course of a decade.

Democracy Partners former treasurer and co-founder Carla Ohringer Engle left her position in 2014 to work for the AFL-CIO. Additionally, several political strategists within the group have either worked for the union or helped represent them in some way.

The AFL-CIO is not the only union that works with Democracy Partners. Close to two dozen labor groups are listed as being clients of the consulting firm. Grossinger also worked for the Service Employees International Union. Nevertheless, the AFL-CIO appears to have the strongest connections to Democracy Partners.

Project Veritas is headed by conservative political activist James O’Keefe. Its use of undercover reporters is nothing new. O’Keefe used almost the same tactics to uncover a scandal that led to the shutting down of the defunct progressive advocacy group ACORN. But in the past, O’Keefe’s tactics and conclusions drawn from his videos have faced criticism.

The AFL-CIO is the largest coalition of labor unions in the country at roughly 12.5 million members. The union has used its vast political reach to mobilize grassroots and national opposition against Trump. It has also officially endorsed Clinton, as have many other unions.

The DNC, AFL-CIO, Democracy Partners and the Clinton campaign did not respond to requests for comment by InsideSources.