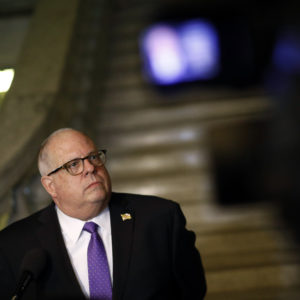 Gov. Larry Hogan (R) is expected to sign the bill this week that will provide $15 million annually for scholarships worth as much as $5,000 to low- and middle-income students who enroll in any of the state’s community colleges within two years of earning a high school diploma or GED. The scholarships are “last-dollar” meaning the money will make up the difference between program costs and financial aid. Students must take at least 12 credit hours. The program will also help with tuition for older students close to earning their degrees but who need financial assistance. Community college costs in Maryland average $4,324 per year.

The funds could mean the difference between a working student completing a degree program or dropping out.

“Community colleges are all about access,” said Martha Parham, a spokeswoman for the American Association of Community Colleges. “That access is the on-ramp to the middle class for millions of students who don’t have the resources or the family structure to go to college.”

That lack of resources too often leads students down an expensive path of loan debt. Estimated at $1.4 trillion, student loan debt is the second largest source of household debt; housing debt is first. A Brookings analysis bluntly headlined “the looming student loan default crisis is worse than we thought” notes that 40 percent of students who started college in 2004 are expected to default on their loans by 2023.

Default rates also tend to be higher among those who borrowed less. According to the Brookings analysis, 37 percent of students who borrow up to $6,125 will default while just 24 percent of those borrowing more than $24,000.

A report from the University of Pennsylvania’s Institute for Research on Higher Education said that college affordability has declined in 45 states since 2008. That is particularly acute for families who spend a greater percentage of their income on day-to-day costs.

A family in Mississippi with an annual income of less than $30,000 per year can expect to spend 28 percent of that income to attend a two-year public college there. In Louisiana, that rises to 47 percent; that same family in South Carolina or Alabama will spend 73 percent for that same education.

“The percentage of family income of what you have to spend to send a kid to college is pretty frightening,” said Joni E. Finney, director of the Institute for Research on Higher Education.

The College Promise Campaign aims to lower the barriers to entry for working families and individuals.

“Education is an investment, not an expense,” said Marth Kanter, the campaign’s executive director and a former U.S. Undersecretary of Education. “We have to make school the desired end for our children. We’ve got to make adults understand that school is critical for their future.”

Maryland is the 18th state to enact some form of college promise. Baltimore City launched a similar program in December in which students graduating from the city’s public schools can receive assistance for community college tuition costs not covered by other financial options.

While covering tuition expenses will make degrees and certificates more accessible, there remain questions about students’ preparedness for those programs.

For the 2010-11 school year, 71.1 percent – 14,793 – of students enrolled in Maryland community colleges needed some sort of remediation, according to the state’s Higher Education Commission. A spokeswoman for the commission estimated that students enrolled in an average of 6 hours of remedial coursework. This is the latest year for which this data is available. At an estimated $122 per hour of remedial coursework, the state spent $10.8 million that year to bring students in community college up to grade level.

“We have to make sure that we provide the academic supports around [students] to make sure they succeed,” Finney said. “We’re not going to turn this around quickly. Remedial education is going to be with us for a while.”

Kanter called remediation a “pervasive” challenge, noting that 47 percent of American adults have the equivalent education of a high school diploma or less. She commended Hogan for developing an “intergenerational strategy” of education.

“There’s under-preparation of adults, and they have children who are underprepared,” Kanter said. “This intergenerational approach is educating parents and kids. The governor is putting a stake in the ground that says, ‘We’re getting a better-educated Maryland.”