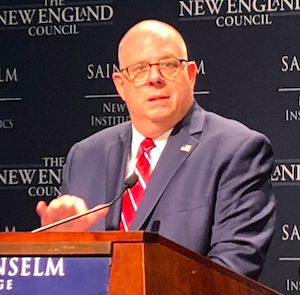 At a New Hampshire appearance on Tuesday, Maryland Gov. Larry Hogan told InsideSources that his party needs to expand its base beyond “hard-core, far-Right Republicans” or risk losing the White House and the U.S. Senate.

Hogan, who is exploring a potential primary challenge to President Trump, frequently mentions his appeal to independent and unaffiliated voters in states that have open primaries. Asked if that’s a sign of lack of support among Republicans for any challenge to Trump, Hogan told InsideSources “You’re not going to win any national elections–and we’re going to lose the Senate and more state legislatures–if you can’t appeal to anyone beyond the hard-core, far-Right Republican base.

“So if you’re going to nominate someone who can’t win a general election, that’s not good for the Republican Party.”

Hogan’s speech centered around his record as governor of Maryland, in particular his political success as a Republican in one of the nation’s bluest states.  Hogan is only the second Republican governor in the state’s history to win re-election, and according to Morning Consult, Hogan is the second most popular governor in the U.S., trailing only fellow Republican Charlie Baker of Massachusetts.

Hogan credited his focus on bipartisanship and results over politics for his success. “I pledged to govern with civility and moderation, to avoid efforts to drive us to the extremes of either political party,” Hogan said in his speech. “I come from the ‘Get To Work, Get Things Done’ school of politics.”

Hogan is openly critical of the state of the national GOP in the era of Trump. “I’m for the return of a more traditional Republican Party,” Hogan said. In particular, Hogan objects to new rules put in place by the Republican National Committee to merge the RNC infrastructure with the president’s re-election efforts.

“What the [Democratic National Committee] did in 2016 is bad, but what the RNC is doing is worse,” Hogan said, referencing the DNC’s now-exposed bias toward Hillary Clinton over Bernie Sanders in the Democrats’ primary.

“To insist on 100 percent loyalty to the ‘Dear Leader’ didn’t sound much like the Republican Party I grew up in,” Hogan said.  “Not that the RNC doesn’t have the right to support the sitting president. But changing the rules and stifling debate is a short-sighted and wrong move.”

So will Hogan join Gov. Weld and challenge Trump in the GOP presidential primary?

“A lot of people have been approaching me since my inauguration asking me to give it serious consideration, and I feel I owe it to them to do just that,” Hogan said. However he repeatedly insisted that he isn’t interested in running just to hurt President Trump or as a protest candidate.

“I’ve said before that I’m not going to launch a suicide mission.  I’ve got a day job that’s important to me and to the people of Maryland,” Hogan said.

When asked if he was worried about facing “the Wrath of Trump,” Hogan replied “I spent 18 months battling cancer. I think I can take it.”