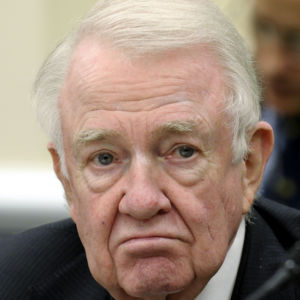 Ed Meese: Trump Muslim Ban ‘Not an Idea Having to Do With a Religion’

Former Attorney General Ed Meese, an erstwhile conservative critic of Donald Trump, is now “very definitely” supporting the Republican presidential nominee — and claiming Trump’s proposed Muslim ban “was not an idea having to do with a religion.”

In an interview Wednesday, InsideSources asked the Reagan appointee — who has reportedly joined Trump’s transition team — about the constitutionality of the New York businessman’s plan for “a total and complete shutdown of Muslims entering the United States until our country’s representatives can figure out what is going on” with terrorism.

Despite the fact that Trump has never clearly withdrawn support for this controversial blanket ban, Meese said the businessman was simply trying to find “some better way of vetting” Muslims coming to America.

“I think it was not a matter of a religious hostility as much as it was concern that, because most of the terrorism activities have been traced back to people who are Muslims, it was a matter of protecting the country,” he said. “It was not an idea having to do with a religion. It was a matter of how do you vet people to try to make sure they are not going to commit acts of terrorism.”

To be clear, this certainly wasn’t true when Trump proposed the ban last December, and it may not be true now.

As the Washington Post recounted last month, Trump initially called for the “total and complete shutdown” temporarily, and that proposal still appears on his website. He subsequently started emphasizing the idea of “extreme vetting” for immigrants, but ultimately said “there’s no way to tell” whether they “have love or hate in their heart.” In other words, knowingly or unknowingly, he argued vetting wouldn’t work.

At one point, Trump floated a ban on immigrants from countries with “a proven history of terrorism.” That would’ve made his policy about nations, not a religion. But then he characterized changes to his plan as “an expansion,” not “a rollback,” allowing the possibility that his blanket ban proposal still stands.

Politico reported last week that Meese had joined Trump’s transition team after writing critically about him for National Review’s special “Against Trump” issue in January. On Wednesday, Meese didn’t confirm or deny involvement in the transition, repeatedly refusing to talk about it. He did tell InsideSources his National Review piece hadn’t been about criticizing Trump per se, but rather the businessman’s “slash-and-burn campaign.”

When InsideSources suggested Trump is still running a slash-and-burn campaign, Meese said the businessman is “more factual than he was [when the National Review piece ran], and by and large I think he’s been somewhat less ad hominem.”

Meese’s comments came following a Heritage Foundation panel on originalism, the conservative judicial philosophy, where the former attorney general was a featured speaker. InsideSources noted that Trump appears to have no intellectual grounding in doctrinaire conservatism, but here, too, Meese defended him.

“The situation you’re talking about is not a hostility towards constitutionalism and towards conservative ideas,” he said. “It’s just not something in his background he’s done a lot of thinking about. When he does think about it, and when he comes up with responses, by and large it’s been on the side of the Constitution, particularly when it pertains to the rule of law.”

Meese said he was confident Trump would appoint justices to the Supreme Court in the mold of originalist Antonin Scalia, who died in February. The businessman has repeatedly made this pledge on the campaign trail.