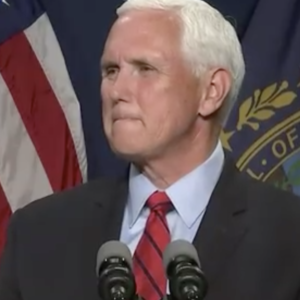 Former Vice President Mike Pence fired the starting pistol on the 2024 presidential race with a speech to the Republican faithful in downtown Manchester, N.H. His message was carefully crafted around the theme of unity which, in a typical political moment, would be unremarkable. But for a Republican Party still struggling to find its way in the post(?)-Trump world, it is certainly worthy of remark.

Pence’s reception itself was remarkable — record-setting ticket sales for the Hillsborough County GOP’s annual Lincoln-Reagan dinner. Whether attendance was driven by pro-Pence passion or simply the desire of politically active people to pull off their masks and socialize is irrelevant. The net result was a roomful of New Hampshire Republicans, a group that is socially moderate, fiscally conservative, and — most important — extremely pro-Trump.

In other words, a potential Mike Pence minefield.

Pence began his speech with a line he commonly uses to introduce himself: “I’m a Christian, a conservative and a Republican — in that order.” It’s a big applause line down south, but New Hampshire is one of the most secular states in the country. Social conservative candidates like Rick Santorum, Mike Huckabee, and Pat Robertson have rarely done well in the “First in the Nation” GOP presidential primary.

Then there was Pence’s “January 6” problem. For, while Granite State Republicans may be relatively secular, when it comes to Trump they are true believers.

An April UNH Granite State Survey, 70 percent of New Hampshire Republicans have a favorable view of the former president. Just 13 percent viewed him unfavorably — in a state where Trump’s unfavorables are 60 percent among independents and a jaw-dropping 99 percent among Democrats.

On January 6, Trump labeled his loyal vice president a traitor and a coward for not stopping the certification of the 2020 presidential election. Some members of the mob that ransacked the U.S. Capitol were specifically looking for Pence in the mistaken belief he had the power to overrule the Electoral College and send the election back to the states.

“Mike Pence didn’t have the courage to do what should have been done to protect our Country and our Constitution, giving States a chance to certify a corrected set of facts, not the fraudulent or inaccurate ones which they were asked to previously certify,” Trump tweeted at the time. “USA demands the truth!”

How would Pence handle the elephant in the room? How would the pro-Trump crowd respond?

Early in his remarks, Pence gave his old boss a few shoutouts. He celebrated “Trump-Pence administration” accomplishments and said, “I learned a lot serving alongside President Donald Trump.”

Then he quickly moved on to a speech that any Republican could have given, one focused on the hot-button issues of the day: Border security, Critical Race Theory, rising crime.

As he reached the end of his remarks, Pence planted his flag for moving forward as a likely candidate for president: His version of ‘Don’t Ask, Don’t Tell.’

“January 6 was a dark day in the history of the United States Capitol. Thanks to the swift action of the Capitol Police and federal law enforcement, violence was quelled. The Capitol was secured,” Pence said. “And that same day we reconvened the Congress and did our duty under the Constitution and the laws of the United States.”

Message: Yes, I defied Donald Trump and I’m not going to apologize for it. So don’t ask.

“You know, President Trump and I have spoken many times since we left office. And I don’t know if we’ll ever see eye to eye on that, but I will always be proud of what we accomplished for the American people over the last four years.”

Message: I know you all support Trump and many of you think I was wrong. I disagree, but I’m not going to tell you that.

“My fellow Republicans, for our country, for our future, for our children and our grandchildren, we must move forward. United.”

Closing message: So let’s just don’t talk about it and instead go get those crazy, socialism-loving Democrats!

Will it work? Is opposition to Biden and the AOC Democrats enough to paper over the divide between the Republicans who think the 2020 election was stolen by Venezuelan hackers using ballots smuggled in from Asia, and the ones who think they’re crazy?

It worked in Manchester. Pence’s unity plea brought the house to its feet, his longest and loudest ovation of the night.

And if Pence wants to find any pathway forward to the 2024 nomination, what other strategy is there? It could be argued that no single American politician — not even Hillary Clinton — was damaged more by the Trump presidency than Pence. Non-Trump Republicans see him as the Donald’s unquestioning lackey, while Trumpworld sees him as part of the 2020 conspiracy. On paper, Pence is a politician without a party.

Which is why his warm New Hampshire reception was so remarkable. If ‘Don’t Ask, Don’t Tell, Let’s Just Go Get Biden’ can work here, it can work anywhere.