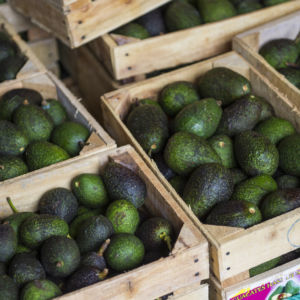 Why Millennial Avocado Lovers Should Care About Trade

American millennials have shown much love for avocado-based foods, but the success of the superfruit in recent years, and its future, depends a lot on international trade.

The avocado market has become increasingly popular over the last two decades with younger adults driving at least some of that demand – often being the center of jokes for their love of avocado toast and guacamole. But alongside the growing popularity of avocados are years worth of trade reforms that have allowed foreign producers more access to domestic consumers, an arrangement that could be at risk.

President Donald Trump has argued on numerous occasions that current trade deals have put American workers at an unfair disadvantage against foreign competitors. His administration has worked to shield domestic workers against foreign competition. Avocados could potentially be at risk since they are primarily imported into the country by Mexican producers.

The Avocado Producers and Exporting Packers Association of Mexico (APEAM) argues that the avocado market exemplifies how trade can benefit both countries even when one is the primary producer. APEAM has represented avocado producers and exporters throughout Mexico since it was founded in 1997.

“In these 20 years, consumption in the U.S. has increased, and I’m talking per capita, from one and a half pounds to more than seven pounds now,” APEAM strategic advisor Ramón Paz told InsideSources. “So increasing consumption more than 650 percent per capita. Nowadays in the U.S., more than 50 percent of households are regular consumers of avocados, and you see that in the restaurants and everywhere. That was not the case 20 years ago when this first began.”

Paz adds that the narrative imported products hurt domestic workers simply isn’t true in the case of avocado productions – for several key reasons. He noted that the surge of avocado imports into the country has actually helped to create American jobs and economic growth while simultaneously helping Mexico as well. He points to a study from  Texas A&M University which found in 2015 that avocado imports have helped to create roughly 19,000 domestic jobs along with $600 million in tax revenue.

“We say it’s a success as an example of the benefits of trade because everyone in the supply chain receives benefits,” Paz said. “The supply chain of avocados from Mexico is creating 19,000 jobs, American jobs, on this side of the border, which represent $1.2 billion in labor income. It is contributing $3.5 billion in economic output. Out of that $3.5 billion, 2.2 are added in the U.S. as part of the gross domestic product.”

Paz also takes issue with the idea that avocado imports somehow hurt domestic producers. There has been a growing notion that the United States should rely less on foreign imports to shift demand towards domestic producers – one that fueled much of the economic populist movement that helped get Trump elected.

“Another comment on trade is that sometimes it hurts local producers,” Paz said. “In this case, the local producers are California avocado growers, it’s the only place in the U.S. avocados are grown. I can tell you there hasn’t much much harm to them, actually, they receive a lot of benefits. Just to give you a data point, in 1996, before we had access, the California growers received 69 percents per pound for their avocados. Last year, 2016, they received one dollar per pound.”

Avocados also require very specific soil and climate conditions in order to grow. California is able to grow avocados because certain areas of the state have the right conditions. But that space is limited and the state also has a specific growing season which means production is not consistent year round.

Mexico, in contrast, has more regions that can grow avocados and is the only country in the world that can produce them year round. Mexican producers accomplish this through a unique combination of natural conditions. The University of Florida found in a 2011 study that Mexico, as a result, supplies 45 percent of the global avocado market.

“All this fruit comes from the state of Michoacán, in the center of Mexico,” Paz said. “This is a state that used to be one of the main sources of migrant workers. In 1995, before we had access, there were more Michoacán workers in the U.S. than Michoacán. Now the avocado industry represents 55 percent of agricultural activity in the state. We created 75,000 permanent year-round jobs because this is an industry that works year round. And we create something like 300,000 seasonal jobs.”

The North American Free Trade Agreement (NAFTA) has become a main target for the administration as it has looked to renegotiate trade deals. NAFTA was implemented in 1994 as a free trade agreement between North American countries like the United States, Canada, and Mexico.

“We are concerned with the current negotiations, but at the same time we are cautiously optimistic,” Paz said. “The reason for that is we represent 80 percent of avocado supplies to the U.S. We are the only country in the world that can supply on a year-round basis. All the other suppliers of avocados have a very specific season.”

Paz adds that while he is optimistic he does have two concerns as the trade deal gets renegotiated. He hopes the administration doesn’t go back to the old standard which imposed a tariff on avocado imports – raising costs on people throughout the supply chain, including the consumer. He also hopes they don’t implement seasonal restrictions that could impact the consistent flow of avocados that restaurants and households have come to rely on.

CNBC found after reviewing a handful of surveys that the obsession millennials have over avocados may be a purely financial decision. They would rather spend money on travel and small luxuries, like avocado-based foods, instead of homes and expensive cars like previous generations.

Many of them also became adults during lackluster economic times making the more expensive life purchases less realistic. The Huffington Post and YouGov also found in a poll that the perception that millennials love avocados more than older generations may be somewhat overblown.