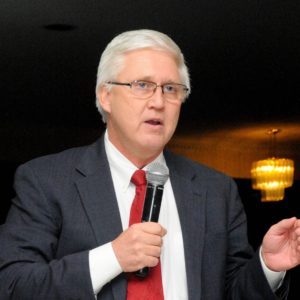 MORSE: Fight for the New Hampshire Advantage by Electing a GOP State Senate

It is understandable that in this highly charged election year, much of the focus is on the races at the very top of the ballot.

And while those races are critically important to the future of our country and our state, I am writing to draw your attention to the 24 state Senate races, whose outcomes could mean the difference between an income tax — or preserving and protecting our unique New Hampshire Advantage.

As the current Senate Republican leader and former Senate president, I know first-hand that conservative policies work for our region and for New Hampshire — and I am proud to be a leader in ensuring they do.

Working with our outstanding governor, Chris Sununu, Republican leadership has helped to sustain and grow New Hampshire as the best state in New England to live, work and raise a family in. Your Republican state senators have been indispensable in working with Gov. Sununu to craft and enact these smart, pro-business, pro-family policies that have helped us navigate the health and economic challenges of the pandemic and made our state the envy of the region.

The Democrats running for state Senate do not share our view of the New Hampshire Advantage.

Republicans know that the key to our success is lower taxes, fewer regulations, more freedom and more trust in you.  The Democrats’ approach is always the same — higher taxes, more regulation and more left-wing policies inspired by Nancy Pelosi, Elizabeth Warren and Bernie Sanders.

They will not be satisfied until they get a broad-based tax to feed their insatiable desire for ever-increasing government spending. Your Republican state senators are an essential firewall against this tried and true Democrat approach to tapping your wallet again and again, every time another new liberal idea comes to mind.

Democrats have controlled the state Senate for the past two years, working against Gov. Sununu and his smart, bipartisan policies at virtually every turn. Electing a Republican state Senate is critical to check the liberal tendencies of our Democratic colleagues to grow government, increase spending and place the weight of a bloated, unresponsive bureaucracy on your shoulders.

But don’t take my word for it. Consider just a few of the ill-advised votes Democrats in the state Senate have taken over the past two years:

— They voted for an income tax, which would burden every hard-working citizen and family in our state.

— They voted against implementing the 10-year mental health plan.

— They voted to raid the drinking water and groundwater trust fund,  money earmarked to protect our environment and critical watersheds.

Time and time again, Democrat votes in the state Senate have reflected the liberal policy objectives of elites in Boston and New York, rather than regular Granite Staters.

To be clear, I have great personal respect for my Democratic colleagues in the state Senate, but to paraphrase President Ronald Reagan, it’s just that so much of what they know isn’t so!

It was a brilliant way to succinctly outline the fundamental benefit of living in New Hampshire: that having no broad-based sales or income taxes sets us apart from our regional state competitors and allows us as individuals, families and businesses to grow, thrive and reach our highest potential. It was true when he said it 25 years ago, and it remains true to this day.

However, the New Hampshire Advantage survives only because succeeding generations of leaders understand and fight for it. Gov. Sununu understands and fights for it, as do I, along with your Republican state Senators and GOP state Senate candidates. Democrats think they know better and seek to take more of your hard-earned dollars.

As you vote over the next week and on Election Day, you get to decide. Please join us and fight for the New Hampshire Advantage.