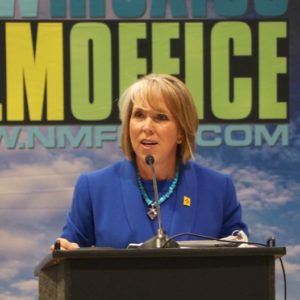 Albuquerque continues tuning its shot to become a major hub in the broadcast television and cable film industries.

NBCUniversal has begun a 10-year project with a local realty company to turn an empty warehouse in Albuquerque into a television and film studio with two sound stages, offices and a construction site for building sets for future programs, Gov. Michelle Lujan Grisham and Mayor Tim Keller announced at a news conference June 14.

In addition, NBCUniversal will keep 330 full-time employees year-round at its New Mexico hub, generating an economic impact of $1.1 billion over 10 years. The total number of jobs, direct and indirect, reached in a decade could be approximately 830, a state economic analysis shows.

“We are thankful for the support of Gov. Lujan Grisham, Mayor Keller and their economic development teams that have helped make our long-term investment in Albuquerque a reality,” they said in a statement.

“We want to be the center of film and TV outside of Los Angeles and New York,” Alicia J. Keyes, state secretary of Economic Development, told the Albuquerque Journal. “It feels great that we have partners and they are committing to be providing consistent jobs.”

NBCUniversal Joins Netflix as an Albuquerque production hub. The online video company announced last year that it plans to spend $1 billion in production in the state, also over the next decade.

City and state officials are offering more than $10 million in incentives to NBCUniversal, according to the agreement. The state Economic Development Department is providing $7.7 million through the Local Economic Development Act (LEDA) and the city of Albuquerque is pledging another $3 million from its LEDA fund.

The city of Albuquerque will act as the fiscal agent for the funding.

According to the agreement, NBCUniversal would be penalized if its direct and indirect spending fails to reach at least $225 million by the end of 2023 and if the amount does not hit $500 million by Dec. 31, 2029.

“Albuquerque is a top-five film city, and by adding film and television production operations to Albuquerque, we are positioning the economy for growth as we capture these new film industry dollars,” Keller said. “When studios like NBCUniversal choose to expand and locate in Albuquerque, it establishes film as a permanent industry and provides steady ground for local film entrepreneurs, post-production work and a broad range of well-paid local jobs.”

Despite all the safeguards, opponents are wary of the deal.

Steve Pearce, chairman of the New Mexico Republican Party, points to the large number of independent studios in the state that could benefit from the extra funding.

“Among the independent groups that have been here that have been working away, that have been making their home here for the last several years, to bring in this group and say: ‘We are going to choose you’ — that’s going down a path, which will not make New Mexico a place to do sound business,” Pearce told Inside Sources.