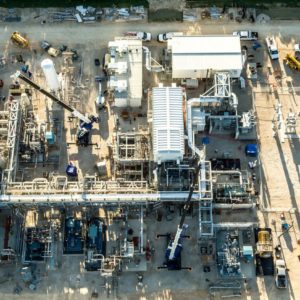 Posted to Energy May 31, 2018 by Erin Mundahl
For years, supporters of America’s domestic energy industry have lauded the environmental benefits of transitioning away from coal-fired plants towards natural gas-fueled generators. Even though natural gas burns more cleanly than coal, it is still a fossil fuel and its combustion emits carbon dioxide and other greenhouse gases. That may not be the case in the future, though, if a new technology soon to go on line in Texas catches on. On Wednesday, NET Power, a collaboration between Exelon Generation, CB&I, and 8 Rivers Capital, announced the completion of the “first fire” of its “supercritical carbon dioxide (CO₂) demonstration power plant.”
“NET Power is the first technology that allows policy and economics to work together, instead of against
each other, to ensure the world meets our climate targets,” said NET Power’s CEO, Bill Brown. “Today marks a significant step for our world-class team, including Exelon, CB&I, 8 Rivers and Toshiba, towards delivering a technology that will be the cornerstone of a modern global energy infrastructure that is clean, affordable and flexible.”

The plant, located outside of Houston, is the first industrial-scale application of NET Power’s new Allam cycle technology. Using a new combuster and turbine specially developed by Toshiba, the cutting edge plant will, when operational, provide 25MW of power and no carbon emissions.

“As the energy sector and electricity consumers become increasingly carbon-conscious, NET Power and Toshiba are poised to provide the market with the industry’s first natural gas power generation technology that is low-cost, flexible, and carbon-emissions free.

To do so, the plant uses something called the Allam power cycle to burn natural gas without creating carbon emissions. The Allam cycle burns the fuel using pure oxygen and uses water and the resulting carbon dioxide to power a single turbine. The exhaust gas is then cooled and the water which condenses out is collected, while the carbon dioxide is compressed mechanically to be re-added into the process. Carbon dioxide which is reheated and recycle back into the combustion unit forms the “working” fluid that powers the turbine.

Using this technology, the plant is able to reuse almost all of the carbon dioxide it emits, obviating the need for expensive carbon capture equipment. Other combustion byproducts are collected at various points of the firing process and can also be sold. In addition, the plant can be run without the addition of water, reducing one source of potential pollution, but at the cost of some loss of efficiency.

What is exciting to many about the new technology is that it operates at roughly the same efficiency level as a conventional natural gas plant.

The $140 million plant was constructed in two years and will also serve as a testing ground for ongoing technological development. Toshiba and NET Power are hoping that recent regulatory changes will make carbon neutral generation technology more attractive to other utilities.

As the Texas plant continues its testing and development, NET Power is working to develop commercial-scale 300 MW natural gas plants using the technology within the next few years, targeting the global deployment of these plants for 2021.

To take on conventional natural gas generation, however, the company will need to determine how to keep construction costs low. Capital expenditure constructure costs for new natural gas generators were $1,056 per kilowatt of capacity in 2014, according to the National Renewable Energy Laboratory. Meanwhile, NET Power is predicting that its first plant will cost around $1,600 per kilowatt, a price that includes the higher costs of permits, warrants, and other details related to the plant being the first of its kind.

According to NET Power, the goal is to get the operating costs of the plant down to $42 per megawatt-hour, the same as that of a conventional plant. In theory, these operating costs could be pushed still lower if the plant is able to also sell some of its combustion byproducts, such as pressurized carbon dioxide.

If they are right, the age of clean power could only just be beginning.