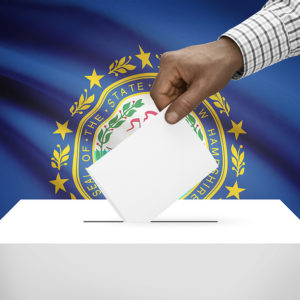 Get ready for another fight over handing out Electoral College votes. Only this one will be in Concord, not at the U.S. Capitol.

Like 47 other states, New Hampshire currently awards all its electors to the winner of the state’s popular vote. Across the border in Maine, however, Donald Trump was able to pick up one of the state’s four electoral votes by carrying the 2nd Congressional District. He did the same in 2016 against Hillary Clinton.

In 2016, Trump won all five of Nebraska’s electors but shed one in 2020, losing the second congressional by more than 7 points to Biden.

Maine and Nebraska, since 1972 and 1992 respectively, have awarded two at-large electors to the statewide popular vote winner and one elector to the winner of the popular vote inside each congressional district.

If Sen. Bill Gannon’s proposed SB43 had been in place in 2016, Trump would have peeled off one of the Granite States electoral votes from the 1st Congressional District — despite then-Rep. Carol Shea-Porter (D) winning re-election. In 2020, nothing would have changed, and all four electors would still have been awarded to the president-elect.

But, Gannon, the prime sponsor, said voters are the real winners. “This will ensure voters are more fairly represented in the electoral system,” he tells NHJournal. “The current winner takes all system disenfranchises sometimes a majority of a New Hampshire district’s voters.”

In today’s climate, it’s hard to see anything outside a partisan lens. “The bill favors neither party, but right now both sides think it favors the other,” Gannon said. He also noted “[redistricting] may be in the back of the minds of legislators of both parties at this time,” even though it should not be a factor. “This bill favors all voters being more represented and not either party.”

Notably, there has not been a presidential election close enough that one elector would shift the balance. In one of the most infamous modern presidential races, 2000’s Bush v. Gore, former President George W. Bush barely won 271 electoral votes – narrowly passing the 270 vote threshold. In that race, two lost electors would have resulted in a tie – a result not seen since the fourth presidential election in United States history in 1800, which produced a tie between Thomas Jefferson and Aaron Burr.

And 2000 was also the last presidential election that a Republican won New Hampshire’s popular vote – with Bush winning a narrow 7,000 vote victory over Gore. In that race, a split electoral delegation would have resulted in three electoral votes for Bush and one for Gore.

“If it ain’t broke, don’t fix it,” said Chris Ager, Republican National Committeeman for New Hampshire. “That’s just my conservative nature. No need to disturb the Electoral College at all,” Ager told NHJournal.

N.H. Democrats introduced a bill in 2018 to award New Hampshire’s electoral votes to the national popular vote winner. The National Popular Vote Interstate Compact, as they call themselves, is a group pushing for states to adopt this method. If the compact’s states reach a combined 270 electoral votes, they’ve agreed to cast them all to the national popular vote winner, regardless of how their states voted, essentially doing an end-run around the U.S. Constitution.

Some legal scholars believe the compact is unconstitutional. Willamette University law professor Norman R. Williams wrote in Harvard Law Review: “In my view, it is unconstitutional for states to appoint electors against the wishes of their own state electorate but in accordance with the will of voters outside the state. I also think that the practical problems with the NPVC will invite litigation on a far greater scale—and with far greater consequences for the legitimacy of our presidential elections—than what the nation witnessed in Bush v. Gore.”

Then there’s the upside-down politics. New Hampshire is one of the small states that benefit from the Electoral College system. President Trump made multiple stops in the state last year, in part because it was easy to envision a close race where the four electoral votes would matter. Those days would end if a popular vote system were enacted — as would (many political pros believe) the state’s First in the Nation status. The Granite State would lose both status and income if the pro-popular-vote forces win the day.

So, why do all four of the Democrats in New Hampshire’s federal delegation favor dumping the Electoral College?