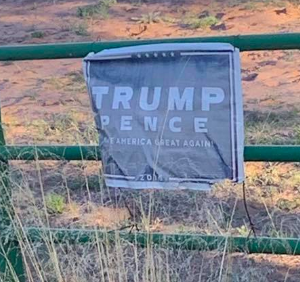 New Mexico’s politics may be as turquoise blue as the state gem, but the Trump 2020 campaign has set its sights on turning the Land of Enchantment red in next year’s election. And what may appear to be an impossible undertaking on paper has credence among ranchers and landowners on the border, where President Trump’s migrant policies are popular.

In April, Trump’s campaign manager Brad Parscale said on CBS’s “Face the Nation”: “I think New Mexico is in play for 2020.”  This despite the fact that Democrats have won six of the past seven presidential contests. President Obama won by 14 percent in 2008 and by 10 percent in 2012; Hilary Clinton by 8 percent in 2016.

President George W. Bush was the last Republican to win the state in 2004 — beating Democrat John Kerry by only a fraction of a percentage point.

If Donald Trump is destined to end that streak, the evidence has yet to appear in the polls. In the most recent Morning Consult poll, Trump is underwater among New Mexico voters by 15 points (41 percent approve, 56 percent disapprove) and his net approval in the state has decreased by 32 percentage points since he took office.

The state’s entire congressional delegation is Democrat and most New Mexico state-level politicians can be labeled liberal. Gov. Michelle Lujan Grisham (D) was elected on a progressive platform last year and her spokesman Tripp Stelnicki scoffs at the president’s chances.

“It’s a non-starter,” Stelnicki said. “While we feel confident, you never take anything for granted. So we’re going to do the work we need to do this year and next to make sure the president doesn’t win New Mexico. Confidence is good; doing the work is better.”

But don’t tell that to Couy Griffin, a county commissioner in Otero County, with a population of approximately 65,000 and 20 miles from the U.S.-Mexico border in El Paso, Texas. Griffin also leads “Cowboys for Trump,” which in February rode into Washington on horseback, an eight-day ride from Cumberland, Maryland, to show their support for the president.

“I think he has a huge [chance] at swinging New Mexico, because of the impacts that New Mexico is going through right now in regard to an unsecure border and the complete disastrous representation we have on the state level,” Griffin told InsideSources. “It is all liberal Democrats, from the governor to our upper-level U.S. representatives and state representatives.”

“They take a political position that there is no crisis on the border, we don’t need a secure border, we need to allow anyone who wants to come into our country to come in and they are just overwhelming the Border Patrol resources,” Griffin said. “The effects of that inside of our county are devastating.”

Griffin said he has information “from a reliable source” that the president will be visiting New Mexico in the near future, “and when he does, he going to come with a strong message that puts new Mexico and New Mexico families first and he’s going to speak deep to the hearts of the people of New Mexico.”

In addition, a Griffin proposal to issue an invitation to Trump was passed by the Otero County Commission on June 13. “We will warmly welcome you, Mr. President, and be grateful for your attention and leadership in a state that is in crisis,” the letter states.

Steve Pearce, chairman of the New Mexico Republican Party, believes Trump has a chance to win because of “the economy.” Pearce told InsideSources he emphasizes to groups daily that the president is bringing jobs to minority communities.

Pearce said more Hispanics are backing Trump than in 2016, because: “They see their pay improving, they see their status improving.”

“The economy is probably the most significant thing. I am out there talking every day bringing [Trump’s] message [even] to communities where he might not be too popular,” Pearce told InsideSources. “I’m talking to minority groups. I’m talking to the black community, to the Asian community — they know me well.

“I was in Congress 14 years and a lot of people came to me — Asians, Hispanics — trying to get some help, even if they weren’t in my district,” he said. “So they trust me.”