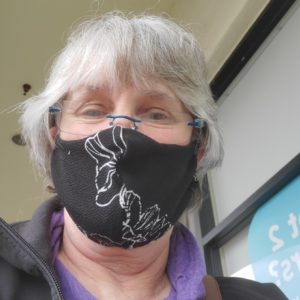 Posted to Politics May 22, 2020 by Christopher Maidment

Mask-less shoppers in Nashua could face fines up to $1,000 for violating the city’s new mask mandate.

The Board of Alderman voted to implement a new emergency ordinance on Thursday evening requiring all persons to wear a cloth face covering to enter any business, multi-unit residential complex or commercial building.

Alderman Jan Schmidt, speaking with NHJournal, says she hopes other cities and towns join Nashua. In her role as a state representative, Schmidt signed a letter with 177 of her fellow Democrats demanding a statewide mandatory mask order. Other prominent Democrats, like Executive Councilors Debora Pignatelli and Andru Volinsky (the latter a candidate for governor) have endorsed a state mask mandate.

In Salem two weeks ago, a similar ordinance before the Board of Selectman did not pass and went down without a vote. Governor Sununu has rejected the idea of a statewide order so far.

“We always recommend people wear a mask, of course. We recommend it, but we’re not at a point where we’re mandating and fining people for it, definitely not,” Sununu said earlier this month. The governor has indicated that towns and cities may enable their ordinances like the one Nashua passed Thursday.

“Look, if a town or a city wants to take up those mandates for masks there are towns and cities that have the ability to do that, that’s their choice, we’re leaving it there,” Sununu told NHJournal.

“The Governor is doing a fine job re-opening the state,” Schmidt said Friday. “Masks, especially in cities and towns near our southern border, will be an essential part of this.”

Schmidt says she opposed an effort from some of her fellow Aldermen to add a punitive section to the ordinance. “We don’t need to be fining people or monitoring them. It should be simple: people entering a business must wear a mask.”

There is an existing ordinance that allows the police department to penalize disorderly conduct with a fine of up to $1,000.

Alderman Lopez moved the passage of the ordinance.

“People were wiping their noses on employees’ shirts,” he told the Board of Alderman, arguing that businesses are being “blamed” for trying to protect their employees and customers.

“This is a role the city needs to take a leadership role in. That’s why we’re elected,” Lopez continued.

Kevin Avard, candidate for State Senate from Nashua (District 12), says it should be up to businesses to decide. “I think it’s over the top,” Avard told NHJournal. “People may protest and shop out of town now.”

“This ordinance will only increase fear and prolong the financial pain business are already suffering,” he said. “This has gone too far for too long and is rife with potential bureaucratic and political abuse.”

Daniel Kilgour, a Hudson resident, says this decision will give him pause about shopping in Nashua. “Alderman Clemons is absolutely right that Nashua will now become a target for those wishing to protest these Draconian measures,” Kilgour told NHJournal.

Alderman Ben Clemons voted against the mask mandate. “I was told by some people that they intended to hold rallies outside of City Hall if the mask mandate passed,” he said on a public Facebook post.

“The whole thing is unnecessary. We could have gotten more people using masks by encouraging them without mandating them,” Clemons continued. “The other reason I voted no is that the fine is way too harsh, and people are going to be economically hurt by this if they do get fined. Overall, this is bad public policy.”

Nashua Police hope to come out on the other side of this with zero arrests and zero summonses. Speaking with NHJournal, Captain Craig Allard said, “We realize this is a polarizing topic. We’re used to that. Our goal is to educate, educate, educate.”

“The department has the authority to enforce the ordinance, just as we do with the Governor’s orders, including Stay at Home 2.0,” Allard continued. “But we have discretion. For example, not everyone gets a speeding ticket when stopped. The point of traffic laws is to change behavior, not to punish.”

City Corporation Counsel Steven Bolton expects few if any arrests for violating the new ordinance. “Only if they [violators] are extremely recalcitrant.”

“It would most likely happen in conjunction with another crime committed in the escalation of the ordinance. If a violator is asked to leave by a business, and if they refuse even when asked to leave by police, they’d be criminally trespassing.”

For businesses who refuse to enforce the ordinance and allow unmasked people in their establishments, the circumstances are different.

Captain Allard says there’s no direct mechanism for enforcement in that case. Most likely, they’d refer the matter to the Department of Public Health or the Fire Department.

“We’ve already received a couple of calls like that, relative to the Stay at Home 2.0 order,” says Allard. “It’s not that they weren’t complying; it’s that people had different interpretations of the Governor’s order.” The Captain again reminded NHJournal that their goal was voluntary compliance, education, and community policing – not enforcement.

The Department of Public Health controls licenses for restaurants and bars, while the Fire Department controls Occupancy permits. Those departments may end up enforcing the ordinance concerning businesses not complying.