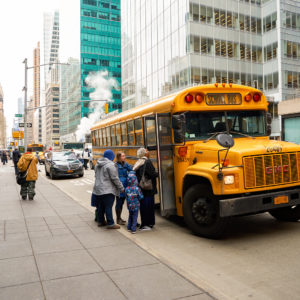 Public charter school funding, measured on a per-pupil basis, still lagged behind allotments for traditional public schools in New York City as of 2014, according to a new study released last month. While New York City has taken steps to narrow the funding gaps, researchers argue that school funding imbalances between the two types of public schools are commonplace across the country.

According to a new report out of the University of Arkansas, the public charter sector in New York City received about $4,888 less per student than traditional public schools in 2014. Both types of schools, however, far exceeded the national per-pupil expenditure average, which the federal government pegged at $11,222 for the 2013-2014 school year. For comparison, traditional district schools in New York City received $26,169 for each student, while the charter schools in the the city received $21,281 per student.

The University of Arkansas researchers had put out a similar report a few years earlier that found even more striking differences between public charter and traditional public school funding levels. That report had been pilloried by researchers at the National Education Policy Center, who argued that the Arkansas researchers had failed to account for the ways traditional public schools financially support public charters that operate within district boundaries.

For this most recent report, the Arkansas researchers updated their methodology, and discovered that traditional school districts do offer significant “in-kind” support to charters. In many cases, charter schools are permitted to operate out of district-owned buildings rent-free. Charter schools also frequently receive food service, transportation, special education, nursing, and other services from district providers.

In total, the researchers found that roughly a quarter of per-pupil charter school funding comes from in-kind services provided by New York City’s traditional school district, leading them to remark that “in-kind support from the [New York City Department of Education] to the city’s charter schools is among the highest we have seen in the country.”

Even after taking these in-kind supports into account, however, the charter school sector is still underfunded on a per-pupil basis, according to the report. The researchers argue that this makes for a regressive funding system in New York’s schools, as the charters enroll a higher number of students from low-income households. (The traditional public school sector enrolls a slightly higher percentage of special education students, but not enough to offset the funding disparities, according to the analysis).

Despite the lingering funding imbalances, student achievement in the city’s public charter school sector has been impressive. According to 2016 test results, charter school students outperformed district students by wide margins in both reading and math proficiency rates. The charter schools were also over-represented among the top 50 schools in the city.

Since the data used in the report was gathered, the New York state legislature has passed reforms that should further narrow the funding gap between the public school sectors. In particular, a funding deal passed earlier this year will result in an additional $1 billion for state charter schools, and future funding increases will be tied to increases for the traditional public school sector. Charter schools that have had to secure their own facilities will also receive some additional funds according to the new law.

The compromise between the state’s powerful teachers’ unions and charter school advocates, left some, like the Success Academy founder Eva Moskovitz, upset that charters did not receive a bigger boost. In addition, Moskovitz and other school choice advocates were upset that officials did not lift the cap on the number of charter school seats permitted in the city.