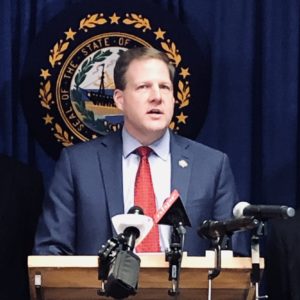 While teachers unions in Democratic enclaves like Chicago and Los Angeles continue to resist a return to classroom instruction, in New Hampshire, Republican Gov. Chris Sununu has had enough. On Friday, he signed an executive order requiring Granite State public schools to get back to class.

“Starting March 8, all K-12 schools must provide the option of in-person learning at least 2 days a week,” Sununu said in his announcement. “The data is clear. Even without complete teacher vaccination, schools can reopen safely.”

Like many places in America, the debate over reopening classrooms has been waging in the Granite State for weeks, both between the governor and the unions and between parents and their local school districts. Sununu has repeatedly pointed to studies indicating classroom transmission of COVID-19 is extremely rare.

NEA-NH President Megan Tuttle, head of the state’s largest teachers union, insists teachers should be vaccinated before classrooms are reopened, going so far as to call them “first responders.”

Meanwhile, across the border in Massachusetts, the teachers unions are saying they want to see more money and more vaccinations before they’re prepared to meet President Biden’s stated goal of getting kindergarten through eighth-grade classrooms to fully reopen in his first 100 days in office.

“Biden’s plan is very ambitious,” said Merrie Najimy, president of the Massachusetts Teachers Association. “But if he wants schools to be more in person in his first 100 days he needs to back that up with significant resources.”

Does this mean that increased funding will lead to reopened classrooms? Not necessarily.

During a Sunday appearance on ABC, Biden’s spokesperson Jen Psaki said the administration wants full-time, in-class instruction in a majority of schools by April. However, when pressed on whether schools receiving these billions of dollars should be required to reopen, or whether aid should be withheld from schools that choose to keep classrooms closed, Psaki said no.

“That’s not a contingency that we are recommending,” Psaki said.

Which is why parent advocates, like Keri Rodrigues of the National Parents Union, praised Sununu’s decision.

“We have to start making progress towards getting kids back in classrooms,” Rodrigues told InsideSources. “And we are in this hyper-politicized moment when teachers have ever-changing goalposts about when that’s going to be possible. So what we really need, not just in New Hampshire but across the country, is governors stepping up and using the power that they have.”

And for some supporters of open classrooms, even Sununu’s actions aren’t enough.

“Although this is a step in the right direction, all schools should be open five days a week, with parents given the option to send their children to school for in-person instruction,” said Lindsey Burke of the Heritage Foundation’s Center for Education Policy. “All the data suggest it is safe to reopen schools to in-person instruction, and that keeping them closed can be detrimental to students. Hopefully, this March 8th plan for in-person learning two days per week is quickly followed by a shift toward full-week opening.”

Sununu says it shouldn’t be difficult for the remaining schools to return to at least part-time classroom instruction.

“Whether it’s the CDC, or the state [Department of Health and Human Services], everyone has said that there’s no reason that these schools can not open, even without vaccinations. And that model has been born out time and time again,” Sununu said.

Rodrigues holds education professionals responsible for the slow pace of school reopenings. “The fact of the matter is when you have school administrators and teachers unions who are making this more of a political fight, it’s just making the situation worse, because it’s not a science-driven conversation we’re having right now.”

As a result, Rodrigues adds, “parents are waking up and seeing the fact that oh, wow, uh, in all of our education conversations, you know, none of this has been about what’s best for kids.”