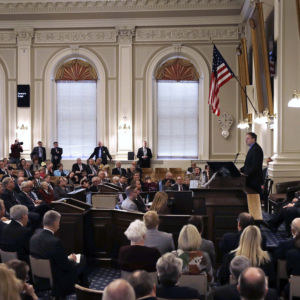 After weeks of uncertainty and negotiations, it appears the Republican-controlled legislature could have enough votes to get the state budget passed Thursday, after key conservative groups indicated they intend to vote in favor of the spending plan.

Both the House and Senate are voting on an $11.7 billion, two-year spending plan negotiated by a committee of conference earlier this month. The Senate is expected to approve the compromise, but its fate is less certain in the House.

Gov. Chris Sununu, NHGOP Chair Jeanie Forrester, and House Speaker Shawn Jasper have been quietly making the rounds to appeal to the conservative caucuses in the New Hampshire House. The House Republican Alliance and House Freedom Caucus had concerns about increasing spending over the previous biennium. GOP leadership appears to have quelled those worries after business tax cuts were approved in the final version of the state budget during the conference committee between the House and the Senate.

No members from the two conservative blocs sat on the budget conference committee, which also harbored some bitter sentiments from representatives.

“While the caucus as a whole, finds the level of spending objectionable, we were able, with the cooperation of the Senate, to craft a bill that will have some positive outcomes for New Hampshire taxpayers, and businesses,” said Rep. Anne Copp, R-Danbury. “Many of these points were clear objectives for the [Freedom Caucus] when we went to House leadership in the early stages of the budget process. It is unfortunate that some of House leadership chose to exclude us from the process.”

At first, it was unclear if House GOP leadership would choose to work with the Democrats or conservatives to get a budget passed in the chamber. After anti-abortion language was added to the bill in the conference committee, Democrats said they would oppose the budget.

“What businesses need, with one of the lowest unemployment rates in the country, is a well-qualified workforce, to maintain our quality of life in the Granite State and a sound infrastructure. It isn’t a tax cut,” said House Minority Leader Steve Shurtleff at a Wednesday press conference with more than 30 other Democratic lawmakers.

With their entire caucus planning to vote against the budget, House Republicans cannot afford to lose more than 25 to 30 votes within their own party, depending on how many of the 400 representatives show up to vote.

The conservatives led the defeat of the House’s original budget proposal in April, after 32 Republicans joined Democrats to vote against the plan. It was the first time since at least 1969, when records were first kept, that the House failed to produce a budget to pass on to the Senate.

Despite several conservative endorsements on the final version of the budget, they are not giving the credit to Jasper. The speaker and conservatives have not exactly seen eye-to-eye on many issues this legislative session. Some even blamed him for not getting a budget passed in April because Jasper didn’t give in to their demands. For the budget that came out of the conference committee, some conservatives attributed their change in position due to the governor and Senate leadership.

“The Freedom Caucus cannot thank the Governor and Senate Leadership enough for the work they have done to deliver a budget that is more fiscally responsible, often having to fight House leadership to lower spending and reduce taxes,” said Rep. John Burt, R-Goffstown. “There can be no doubt that it is a bizarre situation when the Senate President and Senate Finance Chair have to work to bring the House Republican caucus together, but that is precisely what happened, and this budget undoubtedly would have collapsed without their efforts.”

Senate Finance Chair Gary Daniels, R-Milford, said he was pleased to hear that members of the House Republican Alliance and House Freedom Caucus would vote for the budget.

“It was important to the process to have input from these legislators regarding elements they felt needed to be included in the proposed budget, and their interaction helped shape the final product,” he said. “What we achieved is a budget that is good for New Hampshire and provides resources for a strong economic future by balancing key priorities, providing personal and business tax relief and growing the state’s rainy day fund, while keeping overall state spending within responsible levels.”

There are still some conservatives that plan to vote against the budget, but whip counts total defections at no more than 25 members. Still, it’s expected to be a close vote and Sununu was optimistic, yet cautious.

“You never get anything by raising your voice and threatening,” he told New Hampshire Public Radio. “No, open positive listening. And when you bringing people in and talking to them and you are opening, and listening, it’s amazing what you can get done.”