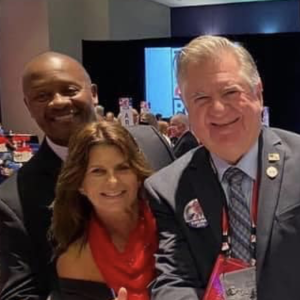 New Hampshire’s delegates to the Republican National Convention in Charlotte, N.C. tell NHJournal that what you see is what you get — and what voters saw from the Democrats’ convention last week was a failure of courage.

“How can you lead the nation when you’re cowering in your basement?” asked NHGOP National Committeeman Chris Ager, referencing Democratic nominee Joe Biden’s decision to largely remain at home due to the coronavirus pandemic and the DNC’s decision to hold a virtual convention.

“This is the most powerful nation in the world,” Ager said. “Leadership takes courage. And I just don’t see any of that coming from the Biden basement campaign.”

The RNC made the decision to hold an actual gathering, bringing some 360 delegates and other party officials to the Charlotte Convention Center for the event — a stark contrast to the Democrats’ Zoom-meeting approach last week. It’s a difference New Hampshire’s RNC delegates repeatedly made during a press call from North Carolina on Monday.

“We’re seeing so much excitement,” said NHGOP Vice Chair Pamela Tucker. “This year’s campaign is going to be such a stark contrast, if there’s any indication based upon how both of these conventions are going.

“Our convention is full of excitement and optimism. That’s what America is all about, and that’s what the Republican Party is about,” Tucker said.

The delegates also discussed the significance of President Trump’s decision to hold his first post-convention rally in the Granite State. Trump is scheduled to visit Manchester on Friday.

The two Democrats competing in their party’s gubernatorial primary have called on Gov. Chris Sununu to stop Trump’s Granite State rally. “Governor Sununu should protect public health, and for once, stand up to Trump and just say No,” tweeted state Sen. Dan Feltes (D-Concord).

“We need a governor who isn’t afraid to tell Trump to stay home or challenge his failed leadership handling the COVID crisis that has cost us over 176,000 American lives,” Executive Councilor Andru Volinsky said Monday.

Asked about their comments, Stepanek accused the two of hypocrisy.

“I didn’t hear a single, solitary reporter, or Democrat, or Republican say ‘just say no’ to the protesters legitimately protesting for Black Lives Matter,” Stepanek said. “I don’t see a difference between a rally and a protest. If it’s all right for one, it’s all right for the other.”

President Trump made an appearance Monday morning after his nomination, addressing the delegates and giving them a boost. “I believe we have far greater enthusiasm in this election,” he told them. “This is the most important election in the history of our country.”

Delegate Eddie Edwards is attending his first Republican National Convention and he says “the excitement you feel here is fantastic.”

“President Trump brings the energy like no one else can.”