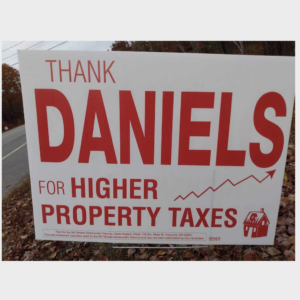 For months, Democrats have been taking incoming fire over the income tax issue, and it appears the GOP attacks are working. Now state Democrats are pushing back by blaming Republicans for New Hampshire’s high property taxes. It’s a strategy Andru Volinsky tried during the Democratic gubernatorial primary.

But property taxes are a double-edged political sword. Saying they’re too high is easy. Offering a plan to lower them — not so much.

Some Democrats support raising other taxes — or even adding a new broad-based tax to shift the tax burden away from homeowners, which puts Democrats right back in the tax-hike crosshairs of the GOP.

Josh Bourdon, who’s running against incumbent GOP state Sen. Regina Birdsell, is one of the Democrats claiming he doesn’t support an income tax. However, on his own campaign page you’ll find: “If NH is basically running on a structural deficit, then we need a consistent source of additional revenue, and an earned income tax is a possible solution.”

State Sen. Jeanne Dietsch, for example, tweeted: “I will not support any broad-based income taxes, and I’ve fought for years for lower property taxes for towns like ours.” Except that Dietsch’s plan to lower property taxes was to add a 6.5 percent tax on income above the Social Security cap — around $133,000 a year.

Volinsky stumbled over the tax issue during his primary, at one point affirming his support for a state income tax before suggesting his plan to lower property taxes for some people would be to raise property taxes on others and have donor towns send money to Concord for re-distribution.

State Sen. Dan Feltes, who defeated Volinsky and faces Gov. Sununu on Tuesday, has repeatedly said he will not support a broad-based sales or income tax. 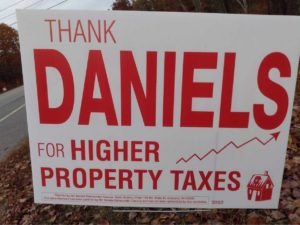 “They’re just muddying the waters,” says former Senator Kevin Avard, who is challenging Senator Melanie Levesque in a rematch for the District 12 seat. Signs have appeared in his district, which spans from parts of Nashua to New Ipswich along the Massachusetts border.

“We sent millions back to towns,” Avard tells NHJournal. “And, on top of that, we were able to lower taxes for small businesses and employers.”

State Senator Bob Giuda agrees and writes that he has “sponsored and voted for legislation that sent $246 million back to NH towns and cities — actually reducing your local property taxes.”

“If the towns spent that money instead of allowing tax relief,” says Avard, “that’s not on the State.”

Gary Daniels, in his own rematch for State Senate District 11 with Sen. Shannon Chandley — covering Wilton, Amherst, Merrimack and Milford — tells NHJournal he has served as both legislator and selectman for Milford for at least the past 18 years.

“I’m very much aware of what we do at the state level and how it affects the local level,” Daniels says. “You either take it out of one pocket, or you take it out of another,” he tells NHJournal.

Recently, Daniels says the Milford Selectboard voted to give $300,000 in surplus back to taxpayers as property tax relief to offset increases in spending that passed at town meeting.

“People have to understand the majority of property taxes that they pay are because they vote for them at town meeting,” he says. “The mindset seems to be ‘let’s spend what we want at the local level and then go to the state to cover our overspending.'”

Giuda agrees: “Keeping local property taxes low isn’t rocket science; it’s simply a matter of voting on the Warrant Articles at your annual Town and School District meetings. The state doesn’t set your local property taxes; the residents of your community do. And if a majority want to spend more, you’re going to pay more.”

State Senators Chandley (SD-11) and Levesque (SD-12) did not respond to e-mail requests from NHJournal to clarify their plan to lower local property taxes without increasing taxes at the state level.

The Democrats’ big problem is that they’ve supported so many tax increases in the past two years — a capital gains tax, higher business taxes, a wage tax to fund paid family medical leave, etc. —  it’s difficult for them to now make the case that the GOP is the real pro-tax party.