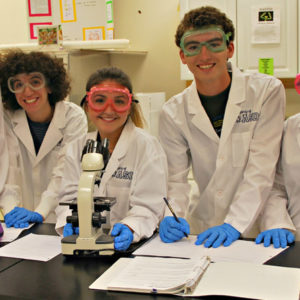 Students at the Academy for Science and Design, a public charter school in Nashua, N.H.
News

In what may be a first in New Hampshire political history, Democratic politicians unanimously said “no” to free education money from the federal government. It’s a stunning reversal for a party that just finished a bruising (and losing) budget battle for an additional $138 million in new school spending earlier this year.

According to New Hampshire Education Commissioner Frank Edelblut, the grant would have gone to increasing the number of public charter schools, professional development for charter school staff, and spreading best practices to public schools across New Hampshire.

“The $46 million public charter school grant is targeted to provide new ways to teach at-risk students. With just one in five economically-disadvantaged students reaching proficiency, we need to find better ways to give these kids a chance at a bright future,” Edelblut says.

Supporters of the federal funding told NHJournal that the money could be used to replicate the successes of schools like the Academy for Science and Design in Nashua, and The Birches Academy of Academics and Art in Salem in those areas of the state that currently don’t have access.

New Hampshire Gov. Chris Sununu’s response to the vote was blunt: “I am sickened by today’s vote, and the Democrats must explain to every single student why they rejected an unprecedented $46 million grant for public schools. For a party that claims to care about public education, their actions today make clear that they will always stand with special interests over the wellbeing of our students.”

Democrats and the state’s teachers union, on the other hand, praised the Fiscal Committee’s vote.

“First, we’re not ready for 20 more charter schools in New Hampshire. We already have 28, and we should stabilize them before we add more — particularly given the fact that the student population in New Hampshire will fall more than 20 percent over the next decade.

When asked if he could recall ever opposing federal education funds coming to New Hampshire for any reason in the past, D’Allesndro answered: “No.”

Sen. Dan Feltes, who also opposes accepting the federal funds, declined to answer that question, though sources in the Legislative Budget Office said they couldn’t find any record of Feltes (or any other Democrats) rejecting federal education dollars of any kind since at least 2013.

This stance runs counter both to the pro-spending rhetoric of the Democratic Party, and the $138 million in new education funds— far more than the federal grant — Feltes and legislative Democrats pushed for during the budget battle.

Feltes told NHJournal that the grant put “New Hampshire taxpayers on the hook for tens of millions. Just not fiscally responsible.”

However, his own education spending proposal earlier this year created a future $100 million structural deficit in the state budget and yet Democrats overwhelmingly supported it.  This fact, and the outspoken opposition to charter schools by teachers unions, has led some to see the blunt force of partisan politics.

“This is a political motion,” Fiscal Committee Republican Rep. Ken Weyler said to the Committee’s Democrats. “You have fulfilled your duties to the teacher’s union. Not to the citizens of New Hampshire.”

Meanwhile, the data indicate charter schools are helping at-risk students succeed. “For the past five years, public charter schools have consistently outperformed traditional public schools in New Hampshire, despite receiving less taxpayer funding and often serving an at-risk student population. We should focus on students, rather than defending the status quo.”

Andrew Cline, chairman of the NH State Board of Education, agreed.

“To watch legislators reject federal funds for at-risk students was shocking. It took time for public charter schools to achieve broad, bipartisan support in New Hampshire. They did that by proving themselves a valuable resource for thousands of students. I’m afraid that this vote has dashed much of that progress and set us back years. It’s extremely disappointing.”