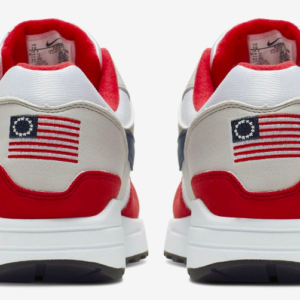 Nike Controversy Raises Question: Do Democrats Have a Patriotism Problem?

So it was a surprise when he decided to weigh in on the controversy involving Nike, Colin Kaepernick, and the American flag.

Tuesday morning the Wall Street Journal broke the news that Nike was pulling its line of Air Max 1 USA sneakers ahead of a planned July Fourth release after complaints about the design from former NFL player — turned political activist — Colin Kaepernick. The shoes feature the 13-star circle design of the Betsy Ross flag which, according to Kaepernick, is a symbol of racism.

“After images of the shoe were posted online, Mr. Kaepernick, a Nike endorser, reached out to company officials saying that he and others felt the Betsy Ross flag is an offensive symbol because of its connection to an era of slavery,” the WSJ reported. Nike responded by canceling its launch of the shoe “based on concerns that it could unintentionally offend and distract from the nation’s patriotic holiday,” according to published reports.

After finding out about Nike’s decision,  Arizona’s Republican Gov. Doug Ducey announced on Twitter he’s pulling about $1 million in state subsidies for a proposed Nike plant in Goodyear, Arizona. “Nike has made its decision, and now we’re making ours. I’ve ordered the Arizona Commerce Authority to withdraw all financial incentive dollars under their discretion that the State was providing for the company to locate here,” Ducey tweeted.

“Arizona’s economy is doing just fine without Nike. We don’t need to suck up to companies that consciously denigrate our nation’s history.” 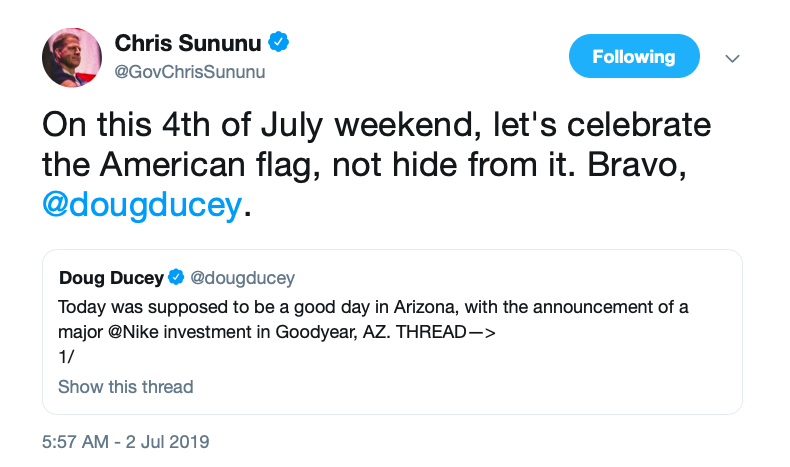 Gov. Sununu’s office declined to offer any additional comment (“The tweet speaks for itself,” a source told InsideSources.)  But it didn’t take long for other moderate Republicans to join in the fray.

Former Florida Gov. Jeb Bush said Nike’s decision to pull the patriotic shoes “will go down as one of the dumbest moves by a company in recent times. Worse, it is offensive to millions.” MSNBC’s GOP — turned independent — commentator Joe Scarborough spoke out: “The Betsy Ross flag is now a symbol of White Nationalism and slavery? Not defiance against a distant monarchy?” “Really, Nike?”

And Missouri Sen. Josh Hawley was brutal and direct:

“Nike thinks American flag is symbol of oppression? What planet are you on? Nike gladly allows Chinese Communist Party to tell it what products to sell while building its business around sweatshop labor. Nike is anti-American, pure & simple,” the Republican senator tweeted.

GOP politicians have apparently done the math and calculated that defending the American flag is winning politics, which is hardly a surprise. But if so, then where are the Democrats?

Elected Democrats have been noticeably silent on the controversy. Few have spoken out on the topic at all, much less in defense of Nike or Colin Kaepernick.  For example, not one of Sununu’s Democratic colleagues in the swing state of New Hampshire issued a single public statement or social media post as of Wednesday morning.

Why so quiet on such a prominent issue?

It could be that, just as the GOP has done its homework, so have the Democrats. And their base has a different view of patriotism and its value.

On Tuesday, Gallup released its latest survey on patriotism in the U.S., with the headline: “American Pride Hits New Low.”

For only the second time since 9/11, “fewer than half of U.S. adults say they are extremely proud to be Americans,” Gallup polling found. And the reason is rock-bottom numbers from self-identified Democrats.

Just 22 percent of Democrats say they are “extremely proud” to be Americans, the lowest level of patriotism recorded by Gallup in nearly 20 years. Meanwhile, nearly one in four liberals measure their patriotism as “only a little” or “not proud at all.”

“There was a time when Democrats did not shrink at being patriotic,” Robert J. Allison, Professor of History at Suffolk University in Boston told InsideSources. “George McGovern, after all, had been a bomber pilot in World War II.  But times have changed. The major source of Democrats operating campaign funds used to come from organized labor. We all know about the Democrats problem with blue-collar workers today.”

What’s changed? “Today the real backbone of the party is now the progressive left,” Allison says.

Economic populism does appear to be taking a toll on the patriotism of progressives. Gallup asks responders to identify things that “make you proud to be an American?”  The vast majority of Americans named the military as a source of pride, while only 32 percent felt the same about our current political system. Interestingly. about the same number of Americans who say they feel little sense of patriotism also say they aren’t proud of America’s economic achievement.

Democrats suggest that the reason for waning patriotism is the Trump presidency, that partisanship — right or wrong — undermines national pride. But partisanship doesn’t explain these numbers. At the lowest point of the Obama presidency, 68 percent of Republicans continued to be “extremely proud to be Americans,” despite their anger at Obamacare and IRS scandals.

Some politicos don’t think cultural issues like these matter. They should ask Presidents Dukakis and Hillary Clinton about that. It’s undoubtedly going to be a topic of conversation at Fourth of July gatherings this year — particularly in the “Most Patriotic State in America:”