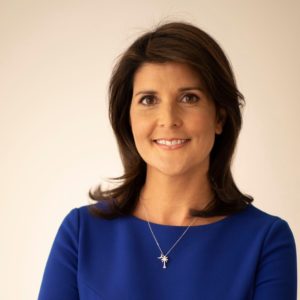 Former U.N. Ambassador Nikki Haley’s reputation for doing her homework was on full display when she spoke to NHJournal on Tuesday. In a brief conversation about her upcoming appearances in New Hampshire on Wednesday, the former South Carolina governor — and likely future POTUS candidate — threw out fact after fact about the Granite State.

“New Hampshire is ranked the number one state in business friendliness and the top state for economic freedom,” Haley said. “Governor Sununu is doing a great job, and it’s pretty amazing that he’s had to veto the Democratic majority’s attempts to impose income taxes and business taxes.

“I used to be a governor, and I know what a Republican majority can do for jobs and business growth,” Haley said. She’s coming to Manchester Wednesday for a “Take Back the House” event with former U.S. Senator Kelly Ayotte. She’s also doing a fundraiser for Republican congressional candidate Matt Mowers in Bedford.

Haley has been campaigning for GOP candidates across the country, many of them in tough re-election contests, like U.S. Sen. Thom Tillis of North Carolina. She also gave a well-received speech at the RNC, making the case for President Trump’s foreign policy successes.

“The UN is not for the faint of heart,” she said. “It’s a place where dictators, murderers and thieves denounce America and then put their hands out and demand that we pay their bills.

“Well, President Trump put an end to all of that. With his leadership, we did what Barack Obama and Joe Biden refused to do. We stood up for America.”

Not surprisingly, Haley’s on the “Who To Watch in 2024” short list. Haley dismisses that talk (“Right now, we want to see the president and Vice President Pence get over the finish line in November”), but she certainly has plenty of fans. It doesn’t help that some of them are in First-In-The-Nation New Hampshire.

“Ambassador Haley is a strong, inspiring leader, and I am thrilled she is visiting New Hampshire to help elect a Republican majority in the New Hampshire House,” Ayotte said.

“We are so excited to welcome Ambassador Haley to New Hampshire. She did not hesitate to agree to join us and support the Fundraiser for the Committee to Elect House Republicans, Hinch said. “I look forward to welcoming Ambassador Haley back several times as we lay the foundation for the 2024 election and electing our first woman President.”

Haley’s itinerary includes an event with “more than 100 strong, empowered NH Republican women candidates,” according to a statement from the organizers.

“I was elected the first woman governor of South Carolina when we were ranked the lowest in the country for women elected officials,” Haley said. “There’s nothing holding women back when they run. The only thing holding them back is that they don’t run.”

Asked whether the emphasis on women candidates echoes the identity politics of the Democratic Party, Haley said being a woman is an integral part of who she was as a candidate, but it was only a part.

“I’m a woman, a mom, a military spouse, an Indian American — it all goes into who I am and, I think, it makes us great at balancing priorities. It all goes into making us who we are as leaders.”

One woman Haley has high praise for is Trump’s Supreme Court nominee, Judge Amy Coney Barrett, who she calls a “fantastic candidate.”

“It’s great that the president appointed a qualified woman, someone with a strong work ethic, and who is all about upholding the Constitution,” Haley said. She expects Barrett to be exposed to some harsh political attacks (“Are they going to throw everything at her? Absolutely!”), but she hopes a line will be drawn at Barrett’s Catholic faith.

“The fact that she’s a Catholic will not interfere with how she applies the Constitution,” Haley said. “Unfortunately, in this toxic environment, I’m afraid it’s going to happen.”

Some people hold her old boss, President Trump, responsible for that toxicity. What’s Haley’s message to New Hampshire Republicans reluctant to cast their vote for Trump?

“I’ve heard from some people who have a problem with the president’s demeanor, with how he acts. And I tell them: Don’t listen to what he says, look at what he’s done. He’s given us a much stronger foreign policy. We’ve had a huge drop in poverty rates and an increase in wages [before COVID]. He’s put 200 conservative judges on the bench. Results matter.”