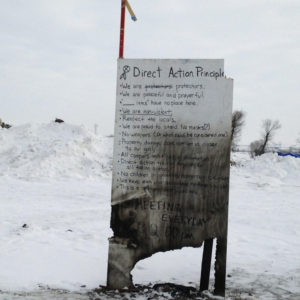 A sign is seen at an encampment set up near Cannon Ball, N.D., Wednesday, Feb. 8, 2017. (AP Photo/James MacPherson)
News

Activists Urge Protests Outside Any Local Bank, Even If Not Tied to DAPL

After months of protest activity, drilling has finally begun on the Dakota Access Pipeline site. Work began on Tuesday as Energy Transfer Partners rushed to make up for lost time, with the company aiming to have the pipeline on line in 83 days.

The fight is not over yet, though. Protesters are rushing, as well, and a group called #NoDAPL Solidarity is urging people to return to North Dakota to stop construction.

On its Facebook page, the Camp of the Sacred Stones is “calling for international emergency actions from Feb. 8 onward.” While the Standing Rock and Cheyenne River Sioux tribes are planning to sue for a temporary restraining order, many of the protesters are taking matters into their own hands.

#NoDAPL Solidarity, a group allied with the protests, held a national call on Wednesday to discuss resistance actions.

“I have no faith in the legal system,” said the woman hosting the call, who did not identify herself and urged any and all supporters to come to Standing Rock to try to stop construction. “Instead we need people to go and support our relatives on the ground.”

Now that construction has begun, protesters are rushing to target even groups with tenuous ties to the pipeline. #NoDAPL Solidarity’s primary targets are Energy Transfer Partners, the Army Corps of Engineers, TD and Citigroup banks, which provided funding for the project. On the call, however, they expanded the list to include Enbridge, Phillips 66, and Sunoco gas stations. They also advised supporters who didn’t live near a Citigroup bank to protest outside other local banks that might have a connection to the fossil fuel industry.

Meanwhile, an update to the Standing Rock website urges supporters to “connect our prayers for the water with other fights against fascism and the domination of people and Mother Earth.” The site lists a range of targets for these left-wing “fights” including Wall Street, deportation, and press censorship.

Various groups opposing the pipeline’s completion are pushing for a week of resistance actions from Feb. 12-17. They hope to culminate in a national strike on Feb. 17. In addition to protesting, #NoDAPL Solidarity encouraged donations to the protest camps, the Freshet collective, and other protest groups.

As time is running out, their rhetoric is becoming more heated. At various points during the call, #NoDAPL Solidarity urged people to “escalate” protest activity, including by interfering with construction on the ground.

“We have to be relentless,” said #NoDAPL Solidarity. “They have that pipeline in the ground. They are drilling under the river. We need to take to the streets.”

The push to escalate resistance comes over the protests of Chairman Dave Archambault and the Standing Rock tribe. Archambault has stated publicly that the tribe will contest construction in court and that protesters should not come to the area.

It’s a message that the protesters have refused to accept.

“The Standing Rock Sioux Tribe has consistently asked for people to go home, and we understand this,”  reads an update to the Sacred Stones camp website. “Regardless, water protectors remain on the ground at the Sacred Stone Camp, determined to stop the black snake, and we support them.”

“If you go, expect police violence, mass arrests, felony charges for just about anything, abuse while in custody, targeted persecution and racial profiling while driving around the area, etc,” it continued.

How many will answer the call remains to be seen.