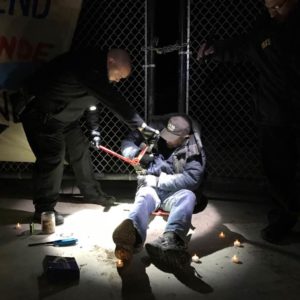 #NoDAPL Shifts Focus from Native Rights to Stopping All Pipelines

When the Army Corps of Engineers announced this weekend that it had decided not to grant the Dakota Access Pipeline an easement to the Missouri River, protesters rejoiced. To many observers, it seemed as though this would be the end of the protest movement and that the tents and tipis would soon be packed up and taken away. After all, the Standing Rock Sioux Tribe had gotten the protection it wanted. However, the protest continued with many calling for the pipeline to be abolished rather than just moved. In addition, the protest is increasingly connected with other pipeline protests around the U.S. and Canada, some of which have no connection to native rights.

While the Sacred Stone camp began with a pledge to protect water, over time, the rhetoric used to describe the protest has shifted. At the beginning, its goal was summed up in the Twitter phrase #NoDAPL. But the current worldwide boycott campaign has paired that with a different slogan “Stop the black snake.” The black snake is a reference to a Dakota legend of a black snake that would threaten the land. The metaphor expands the protest movement beyond the Standing Rock reservation, providing a metaphor and hashtag that other groups have adopted.

These protests span both political and cultural borders.

One of the other protests mentioned on the Sacred Stone Facebook page is not in the United States. North of the border in Quebec, a Mohawk chief has promised to resist the construction of a pipeline known as Line 3, which would transport oil from Alberta to Wisconsin.

Mohawk Chief Serge Simon told the Montreal Gazette that he was willing to push the issue to physical resistance if necessary.

“I’ve always said my favorite form of action is civil disobedience,” said Simon. “If the government insists on ignoring its commitment to First Nations, we’re looking at unrest in many areas of the country, not just in British Columbia.”

Other protests promoted alongside #NoDAPL do not involve tribal lands. Already, signs at the Standing Rock camp provide information about a protest in Florida for those protesters wanting to move south for the winter. The protest against the Sabal Pipeline has no connection to native rights at all and is based on purely environmental concerns.

Another group asking the North Dakota protesters for help is in Texas.

On Tuesday, two activists protesting the Trans-Pecos Pipeline being built in west Texas were arrested after chaining themselves to the gate of the project site. Trans-Pecos is another pipeline being constructed by Energy Transfer Partners, which is building the Dakota Access Pipeline. Lori Glover, one of the two arrested, is the founder of a protest group working to stop the Texas pipeline. She has asked protesters from Standing Rock to come south to help at the protest camp in Texas, but here the goal is not native rights, but stopping oil production.

“We must protect our water, challenge corporate greed, and come to our senses on the truth of fossil fuels and climate change,” said Glover, while chained to the gate.

For the time being, none of these protests have reached the scale of the one in North Dakota. Change may come, though, as the tribe itself seeks to encourage protesters not affiliated with the tribe to head home.  In fact, the remaining protesters are staying against the wishes of Standing Rock tribal chairman Dave Archambault II, who told Reuters that since nothing would happen before Trump took office, he wants the protesters to leave.

“We’re thankful for everyone who joined this cause and stood with us,” he said. “The people who are supporting us … they can return home and enjoy this winter with their families. Same with law enforcement. I am asking them to go.”

Thus far, they have yet to heed his words and instead remain.