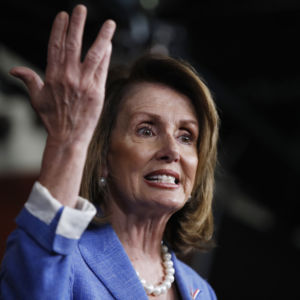 No Friends of Pelosi in Yet Another Crucial House Race

Posted to Politics May 28, 2018 by Andrew Solender

Earlier this month, Michael Graham reported for InsideSources that House Democratic Leader Nancy Pelosi, the oft-maligned San Francisco liberal who has served as leader since 2003, had received zero endorsements from Democratic candidates in a crucial New Hampshire House race. Now, what was already a rare blip in national electoral politics is galvanizing into something of a trend as yet another Democratic field refuses to support the already embattled Pelosi.

“I respect much of the work that leader Pelosi has done over the years,” said Gareth Rhodes a former staffer for New York Governor Andrew Cuomo and a Democratic candidate in New York’s 19th Congressional District. However, he said, “I’m running because I think we need a new generation in there, and I think it’s time for new leadership in Congress.”

The 19th District is currently represented by Republican John Faso, and the Cook Political Report rates the race as a “Toss Up.”

“This isn’t to demean any of her accomplishments,” he added, “this is more about a focus on the future and how I think it’s time for our party to move in a new direction.”

Rhodes is not alone. Of his Democratic opponents in NY-19, all of whom identify as progressive, two, Dave Clegg and Jeff Beals, both said they would not vote for Nancy Pelosi to return to her leadership post if elected. None, however, offered alternative candidates for her position.

Antonio Delgado, Brian Flynn, and Pat Ryan, the top three fundraisers in the race, all refused to commit to a stance on Pelosi.

“I am focused on reaching out and talking with voters every day about important issues like health care, restoring jobs and tax policy,” said Delgado, a lawyer who–while still an avowed progressive–is seen as the frontrunner and establishment choice for the seat. “The people of our region are much more focused on these issues than Washington palace intrigue.”

It is not entirely shocking that Pelosi, a symbol of the Democratic establishment, is not doing well in rural districts like NH-1 and NY-19 where progressive populist Bernie Sanders swept the floor with establishment liberal Hillary Clinton in 2016. However, it is nonetheless a deeply concerning sign for Pelosi that she cannot find a single supporter in either crowded field.

Pelosi has long been used as something of a Democratic boogeyman and straw-person for GOP’s congressional attack ads, and is shown to have some of the weakest polling of any congressional leader. Although Mitch McConnell notably polls even lower.

“The perception is that she’s out for power, she’s out for herself. She won’t sacrifice herself for the good of the party,” said Richard Born, professor of political science at Vassar College. This is due in part to her refusal to step down after calamitous defeats for Democrats in 2010 and 2014.

Pelosi has said publicly she plans to run again for speaker if the Democrats take the House, and so far no current House member has stepped up to challenge her–though Tim Ryan, who has previously challenged her, is expected to run.

“Legislatively she has been effective, she kept the Democrats in line,” said Born. Pelosi steadfastly asserts that this maintains her status as an asset for the party. It seems, however, the new wave of progressive Democrats begs to differ.