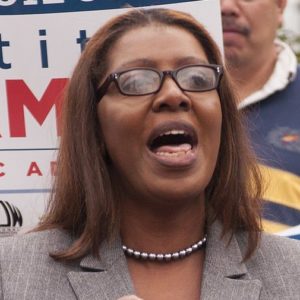 New York Attorney General Letitia James made news when she announced her lawsuit asking the courts to dismantle the National Rifle Association, but there’s nothing new about her views on the pro-Second Amendment group.

During her campaign to become New York’s top cop, she denounced the NRA as a “terrorist organization.”

The NRA fired back late Thursday with a countersuit of its own.

During an October 2018 interview, the incoming attorney general names some of the targets of her wrath: “President Donald Trump and the threat to our democracy and our values,” was one. “And the NRA holds [itself] out as a charitable organization, but in fact, [it] really [is] a terrorist organization,” was another.

Allegations of questionable practices by the NRA leadership, in particular longtime executive director Wayne LaPierre, have been swirling for years. The organization has been embroiled in an internal leadership struggle over claims of financial improprieties by LaPierre and some of his allies.

“LaPierre’s seven-figure salary, penchant for luxury clothing shopping sprees and reports that he sought to have the NRA buy him a $6 million mansion at an exclusive golf community have drawn considerable scrutiny amid allegations of rampant misspending,” the AP reported last August.

“In seeking to dissolve the NRA, James is targeting the very people she says are the victims of fraud and financial abuse: the NRA members,” says Cam Edwards, editor of BearingArms.com and host of “Cam and Company” on the now-defunct NRA.TV network. “In doing so I think she’s opened herself up to charges that this is ultimately a case motivated by politics rather than the public interest.”

Not surprisingly, President Trump entered the fray soon after James’ press conference: “Just like Radical Left New York is trying to destroy the NRA, if Biden becomes President your GREAT SECOND AMENDMENT doesn’t have a chance,” Trump tweeted. “Your guns will be taken away, immediately and without notice. No police, no guns!”

In a statement provided to NHJournal, NRA President Carolyn Meadows called the lawsuit “a baseless, premeditated attack on our organization and the Second Amendment freedoms it fights to defend. It’s a transparent attempt to score political points and attack the leading voice in opposition to the leftist agenda.”

Meadows added, “As evidenced by the lawsuit filed by the NRA today against the NYAG, we not only will not shrink from this fight — we will confront it and prevail.”

Few Americans care deeply about internal NRA politics. What they do care about, said Gun Owners of New Hampshire vice president Joe Hannon, are their Second Amendment rights and the NRA’s place in American politics at the vanguard of protecting those rights.

“The attorney general, from one of the state governments most opposed to the rights of Second Amendment supporters, wants to take down the largest and longest-standing civil rights organization in the country, at a time when more minorities and women are buying firearms than ever before,” Hannon told NHJournal.

“This attempt to harm millions of NRA members, whom James has labeled terrorists, is a blatant abuse of public office. It is meant to terrorize the very people she calls terrorists.”

That won’t work, Hannan said. “It will energize gun owners in November. We will not be silenced.”

“Oh, this is going to backfire, bigtime,” he told NHJournal. Hoell agrees with the NRA leadership that politics is behind this push. “This is a thinly veiled attempt to influence the 2020 election and prop up Joe Biden,” he said.

Gun ownership, which has been on the rise since the Obama administration, is soaring in the wake of both the coronavirus and public disorder. In June, the FBI conducted more gun-purchase background checks than in any single month in history. July was the third-highest total, and March was second. And according to Small Arms Analytics & Forecasting sales in July hit 2 million, a 134 percent year-to-year increase.

“You can see again on May 25, when George Floyd was murdered and then the lawful protests and the looting and rioting that followed as well, saw an enormous spike in gun sales.”

NPR also reported nearly half of these new purchases are by first-time gun buyers, increasing the number of Americans with a vested interest in the Second Amendment.

NRA lobbyist Jason Ouimet told the Washington Examiner: “the NRA has added more than 1,000 new dues-paying members per day since June. The addition of some 60,000 new members — and growing — has helped swell NRA ranks to more than five million American adults.”

James’ lawsuit may cause the NRA headaches in New York, but in New Hampshire it’s almost certainly good news for Second Amendment supporters and candidates who rely on them.

“Voters will pay attention,” veteran GOP strategist Dave Carney told NHJournal. “It will motivate a huge part of the base. And that base was supercharged already.”