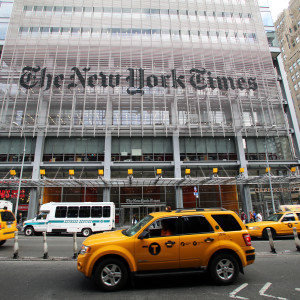 The New York Times editorial board is under fire for an opinion piece that claims a recent study found Seattle is doing fine with a higher minimum wage.

The University of Washington (UW) rocked the minimum wage debate June 26 by finding Seattle is already facing problems as it moves towards $15 an hour. The study found employees had their hours reduced which caused them to lose $125 a month on average. The Times editorial board concluded Saturday the results were tolerable for the city.

“It seems safe to conclude that Seattle has tolerated its minimum wage increase well and that, by extension, other strong economies could do so,” the editorial states. “It also suggests that a key to successful large increases is a gradual phase-in that gives businesses time to adjust and experts time to study the impacts as they unfold.”

The Times backs up the claim by noting the study excluded workers in multisite businesses like fast-food chains. It also notes the loss in hours is likely due to robust competition in the city.

“I can’t think of any worse outcome for a minimum wage experiment than finding the policy reduces take-home pay for employees,” Saltsman told InsideSources. “I don’t know how they read the study and draw the conclusion the experiment is working.”

The UW study acknowledged it left out multisite businesses in an effort to reduce outside interference. McDonald’s and other large chain businesses located in the city likely make decisions independent of local policy. Nevertheless, it is a criticism that has been repeated numerous times since the study came out.

Saltsman first expressed his critique Sunday in an opinion piece for Forbes. Hot Air, a conservative political blog, called the editorial a “head-scratcher.” Hot Air author John Sexton also called out the editorial board for claiming recently that Sarah Palin was responsible for the 2011 shooting of Rep. Gabrielle Giffords.

The Times editorial also argued the study runs counter to the vast body of existing research. The claim has been repeated frequently since the study was first published. Saltsman argues it’s simply not true. He points to research by economist David Neumark who has worked to compile minimum wage studies.

“He basically found reading studies that use a variety of methods, job losses from a higher minimum wage consistent with past studies,” Saltsman said. “That doesn’t mean there aren’t some economists that disagree, there most certainly are.”

Neumark released his most recent report on the matter in 2015 for the Federal Reserve Bank of San Francisco. It updated an earlier report which found similar results. His research looked at minimum wage increases generally, as opposed to just the $15 an hour mark.

The UW study was part of an ongoing analysis to determine how the increase is impacting the city. The Seattle City Council originally commissioned the study, but it has since been trying to distance itself. The city council has primarily favored the policy.

Lawmakers typically design the $15 minimum wage to phase in over a number of years. The gradual implementation is intended to give employers time to adjust. Seattle is currently at $13.50 an hour. The city is scheduled to finally hit $15 an hour at the start of next year.

The Economic Policy Institute (EPI) countered in a separate study that the UW findings are questionable. It contests the negative analysis has data and methodological problems that caused it to find job losses in places there are none at all.

The Fight for $15 movement and other supporters argue the policy could help lift low-wage workers out of poverty. They have argued the current federal minimum wage of $7.25 an hour is too low for people to reasonably live on. The increase might also spur economic growth with a rise in discretionary income.

Those opposed to the increase have warned it could hurt the very people its meant to help by reducing employment opportunities. Employers could be forced to reduce their staff size or increase prices to overcome the added cost of labor. Employees might also have their hours reduced like the UW study concluded.

The New York Times did not respond to a request for comment by InsideSources.