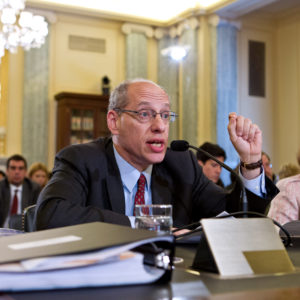 Organized by USTelecom, a trade group run by executives from AT&T, Verizon, CenturyLink and others, the campaign pushes back against new privacy rules the FCC hopes to vote on before the end of the year. The rules would prohibit internet providers from collecting and using subscriber browsing data in targeted ads and service offerings without first obtaining their permission.

Though launched by lobbyists, the opposition campaign relies largely on comments from former Obama and Clinton appointees to the Federal Trade Commission, Office of Management and Budget and Department of Commerce, all of whom oversaw facets of privacy and internet policy while working under their respective administrations.

“[The FCC proposal would] create inconsistent standards across the internet, confuse consumers and undermine innovation that benefits consumers as well,” Jon Leibowitz, former chairman of the Federal Trade Commission during President Obama’s first term, is quoted on the campaign website equalprivacyrules.org.

Leibowitz oversaw the FTC’s recent draft of privacy rules for the online ecosystem, viewed by other agencies as the benchmark of privacy enforcement. The rules applied equally to web companies like Google and Facebook and internet providers before the FCC claimed jurisdiction over the latter with its net neutrality order last year.

As the name of the campaign website implies, Leibowitz and others say the FCC’s first foray into privacy regulation should mimic the FTC’s case-by-case, post-enforcement approach, which often results in companies facing enforcement action after they engage in behavior the agency deems harmful to consumers (though there are standards companies can look to for guidance).

“If we deny broadband providers the ability to offer ad-supported services or other data-based discounts, we eliminate the possibility of offering consumers cost savings and other potential benefits,” a quote by former President Bill Clinton’s former Undersecretary of Commerce, Ev Ehrlich, reads.

By blocking potential behavior preemptively instead of bad behavior retroactively, Ehrlich and others argue the FCC’s rules limit providers’ ability to monetize data to bring down the cost of connections, and take away the choice of consumers to share their data in exchange for discounts and services.

“It’s absurd to be marching ahead with a set of rules for one group of these companies – the service providers who handle the underlying connections and see less and less online consumer information with each passing day due to rampant encryption – but not the companies who record what you searched for, what medical or financial issues you’re concerned with, what you watch and read online, or whom you talked (or sexted!) with,” Ehrlich wrote for Forbes in September.

“At best, it’s like plugging holes in half a sinking boat,” he added — an assessment one of the FCC’s own commissioners agrees with.

Peter Swire, former chief counselor for privacy in OMB under Clinton and a former technology and economic advisor in the Obama White House, authored a study earlier this year (sponsored by the telecommunications industry) that found providers see an increasingly fragmented view of subscriber browsing habits because of their use of multiple web-connected devices and the growing adoption of end-to-end encryption.

“ISP’s [internet service provider’s] visibility into consumer online information is far from comprehensive, and will likely continue to decline because of the increased use of encryption,” Swire said in a excerpt on USTelecom’s campaign site.

USTelecom, the group behind the lost court battle against the FCC’s net neutrality order that made the privacy rules necessary, launched the campaign less than a week after current FTC Chairwoman Edith Ramirez agreed with Republican lawmakers that there should be parity between privacy rules for web companies and service providers.

“I think it is important for there to be general harmony in the way that data is treated,” Ramirez told a congressional oversight committee in September.

Getting the FCC’s rules on the books is more necessary than ever, she added, since the FTC’s recent loss in court against AT&T. The ruling, which essentially said the FTC can’t regulate AT&T and other ISPs because they’re now common carriers under net neutrality, could leave web companies that also provide connectivity, like Google and AOL, immune to privacy regulation.

The campaign launched the same week AT&T plans to discontinue its Internet Preferences program, designed to offer consumers discounts on service in exchange for sharing more of their browsing information with AT&T for targeted advertising.

FCC Chairman Tom Wheeler has said such “pay-for-privacy” programs are exactly the reason the FCC’s rules are necessary.

“I hope that privacy doesn’t become a luxury item,” he said in August.