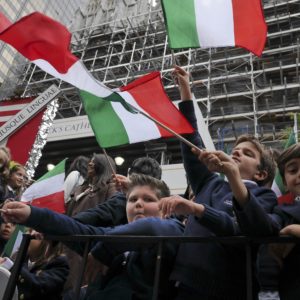 Despite the fact that legendary Italian explorer Christopher Columbus is the city’s namesake, Ohio’s capital will not be observing Columbus Day this year. Columbus, Ohio is on the front lines of the ongoing fight over whether the holiday is a politically-incorrect hate crime.

“The city of Columbus, Ohio, will not observe the controversial federal holiday honoring its namesake, Italian explorer Christopher Columbus, for the first time this year,” USA Today is reporting,  “though a spokesperson for the mayor’s office said the decision was not spurred by movements to replace Columbus Day with Indigenous Peoples Day, a counter-celebration held on the same day to commemorate Native Americans.”

“If you talk to people who live in Canada, we look like we are in the Stone Age,” Durham Town Council Chair Kitty Marple said of celebrating Columbus Day at the time.

And during the debate in the Democratic gubernatorial primary in August, Molly Kelly stated clearly that she would support dumping Columbus Day here in New Hampshire and replacing it with the more politically-correct alternative.

Is this a winning political position?  It’s certainly a popular idea in liberal enclaves like Los Angeles, Seattle, and  Brown University, but how does the average New Hampshire voter feel about it?  In particular, the 100,000 or so Granite Staters of Italian heritage?

The anti-Columbus Day legislation failed in Concord, and few New Hampshire politicians are promoting it.  But Molly Kelly has made it clear–She’s ready to sink Columbus Day in New Hampshire.