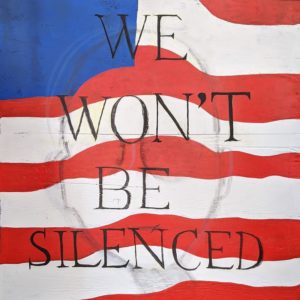 Sunday is Flag Day, a day of honor for the most well-known symbol of the United States. But this year, a movement to take to a knee — a past sign of disrespect for the flag — has become commonplace among Black Lives Matter protests in wake of the brutal killing of George Floyd.

According to the National Flag Day Foundation, President Woodrow Wilson first declared June 14th as National Flag Day in 1916. President Wilson proclaimed: “The Flag has vindicated its right to be honored by all nations of the world and feared by none who do righteousness.” But the flag has often been used, and some say abused, as a symbol at the center of our national debates.

However, tensions surrounding the Black Lives Matter protests are so high, one representative of a veterans’ group told InsideSources that flag supporters are reluctant to publicly discuss the issue in light of the demonstrations.

A woman carrying an Amerian flag inside the “Capitol Hill Autonomous Zone” has it ripped away by a fellow protester.

In addition to demonstrators nationwide — and even Democratic members of Congress — taking a knee, in some places the desire to show anger over current events in America has led to more direct actions, in which “Old Glory” was destroyed or defaced.

In Richmond, Virginia, last week, Black Lives Matter protesters burned an American flag that cradled a fallen Christopher Columbus statue. The statue was taken down by protesters in a show of support for indigenous people.

Local station WWBT-TV reported one of its photographers was accosted by one of the protesters and forced to leave. The station reported that the base of the statue was spray-painted and that demonstrators left a sign that read: “Columbus represents genocide.”

In Bethlehem, Pennsylvania, homeowners recently awoke to graffiti and flags damaged or torn down. One home had the word “racist” painted on the sidewalk, and “ACAB,” an acronym for All Cops Are Bastards, and “FU” on the front patio.

A thin blue and red flag — an American flag in black and white, with a half blue and half red line signifying law enforcement and firefighters — was torn down and left on a front porch.

Brees was asked about the possibility of football players sitting or kneeling on the sidelines during the national anthem next season, as former San Francisco 49ers quarterback Colin Kaepernick did in 2016 to protest racial injustice and police brutality.

“I will never agree with anybody disrespecting the flag of the United States of America or our country,” Brees told Yahoo Finance. “I think what you do by standing there and showing respect to the flag with your hand over your heart, is it shows unity. It shows that we are all in this together, we can all do better and that we are all part of the solution.”

Brees later apologized for his remarks, and then was reprimanded by President Trump for taking them back.

“I am a big fan of Drew Brees. I think he’s truly one of the greatest quarterbacks, but he should not have taken back his original stance on honoring our magnificent American Flag,” Trump said in a tweet. “OLD GLORY is to be revered, cherished, and flown high … We should be standing up straight and tall, ideally with a salute, or a hand on heart. There are other things you can protest, but not our Great American Flag — NO KNEELING!”

This isn’t the first time Brees has spoken out about Kaepernick’s kneeling as a form of protest. In 2016, he told ESPN that he saw the protests as disrespectful.

“But there’s plenty of other ways that you can do that in a peaceful manner that doesn’t involve being disrespectful to the American flag. … It’s an oxymoron that you’re sitting down, disrespecting that flag that has given you the freedom to speak out.”

Kaepernick began the controversy when he refused to stand for the playing of the national anthem — and later took to one knee — in protest of wrongdoings against African Americans and minorities in the United States. He admitted his target was also the flag.

“I am not going to stand up to show pride in a flag for a country that oppresses black people and people of color,” Kaepernick told NFL Media at the time. “To me, this is bigger than football and it would be selfish on my part to look the other way. There are bodies in the street and people getting paid leave and getting away with murder.”

Politics aren’t the only problem facing Flag Day observances this year. The National Flag Day Foundation recently announced a hold on “organized program, parade, family day, or other activities at the Americanism Center on June 14, 2020” due to the coronavirus pandemic.

“While this was an extremely difficult decision, it is the right decision and sometimes doing what is right is not easy,” the foundation said.