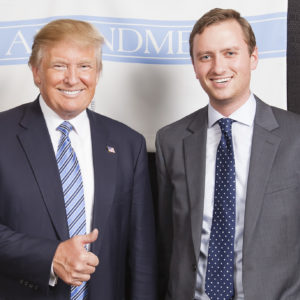 As Granite State Republicans, we all have one shared goal in November: Beating Joe Biden, Jeanne Shaheen, Chris Pappas — and the radical, socialist agenda they stand for.

President Trump knows what we are up against in New Hampshire, and that the only way we will reach this goal is by unifying our party behind the candidates who have proven they are ready to get the job done.

Those candidates are Corky Messner and Matt Mowers, the conservative leaders we need to beat the far-left radicals, who have forgotten our great state’s motto.

Unfortunately, our primary election is not until September 8th, one of the latest primaries in the nation. I’ve heard from many people who have asked why this primary is so late. The answer is simple: it’s rigged to protect the incumbents.

The president’s endorsements allow us to coalesce early behind both Messner and Mowers, candidates for United States Senate and House of Representatives, respectively. In doing so, they will have more time and resources to run a general election campaign, connecting with voters across the Granite State.

Jeanne Shaheen and Chris Pappas already have one huge advantage over us: They get to sit in Washington D.C., raking in pallets of campaign cash from megadonors, while Republicans scramble to choose our nominees.

If we follow President Trump’s lead, we can diminish their stranglehold over our election.

Instead of running a general election against incumbents in just 70 days, long past the first uptick of absentee ballot requests in July, the endorsed candidates can focus all of their efforts on their Democrat opponents and victory in November.

We all know President Trump doesn’t pick losers — and here in New Hampshire, his endorsements are no exception.

Corky Messner is a businessman who left home at seventeen to attend West Point, our nation’s premier military institution. After graduating, he served our nation guarding the Berlin Wall, getting to see the failures of socialism firsthand.

After returning home, Corky attended law school, and he founded a business with more than 300 employees with offices in nine cities.

Messner has a passion for service, and knows exactly why we cannot afford to let the United States become a socialist country.

Matt Mowers has the credibility and the resume to get things done in Washington. Mowers served President Trump as the senior White House advisor at the State Department, working as a diplomat on a wide range of issues such as immigration reform, religious freedom and ensuring that the United States continues to lead the world in combating terrorism.

He also helped lead the President’s Emergency Plan For AIDS Relief, or PEPFAR, the United States global relief program to combat the HIV epidemic. PEPFAR is credited with saving more than 15 million lives across the world.

Mowers needed to work with Congress, alongside faith-based organizations and leaders across the world to ensure PEPFAR could keep doing this critical lifesaving work, and he got the job done.

Both Corky Messner and Matt Mowers have established themselves as not only qualified to represent our state, but also capable of running well-funded, competitive races that will push back against Nancy Pelosi and her allies’ socialist agenda.

As Granite Staters, we take pride in our elections. President Trump honors and understands this, which is why he wanted us to have as much of an advantage as possible against the Democrat incumbents as we move toward November.

I am grateful for the president’s leadership, and thanks to his initiative, we are in a better place than ever to turn New Hampshire red.

Rep. Fred Doucette (R-Salem) is New Hampshire Chairman of the Donald Trump for President campaign. He wrote this for NHJournal.com.