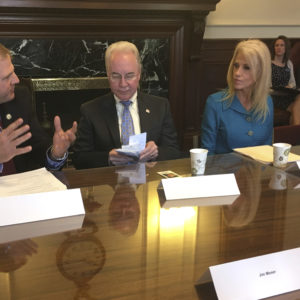 New Hampshire Gov. Chris Sununu, from left, U.S. Secretary of Health and Human Services Tom Price, second from left, Kellyanne Conway, an advisor to President Donald Trump, and Jeff Meyers, commissioner of New Hampshire's Department of Health and Human Services, take their seats on Wednesday, May 10, 2017, in the executive council chamber in Concord, N.H., prior to a closed-door meeting to gather information on the state's opioid crisis. (AP Photo/Kathleen Ronayne)
News

The latest stop in Tom Price’s opioid crisis listening tour brought the health and human services secretary to the New Hampshire State House on Wednesday. He wasn’t alone, though. Always near him was Kellyanne Conway, counselor to President Donald Trump. They were joined by Gov. Chris Sununu, state Health and Human Services Commissioner Jeffrey Meyers, and Democratic U.S. Rep. Annie Kuster of New Hampshire, among other treatment providers, law enforcement, first responders, and families who have been impacted by the substance abuse crisis.

The meeting in Concord only lasted about an hour and members of the press were not allowed to be in the Executive Council chambers where the listening session took place. Afterwards, Price and Conway went to Manchester Fire Department to learn about the city’s Safe Station program. Press were also kicked out at first, but were then invited back in.

At a press conference after the listening session, Price said solving the opioid crisis is a priority for the Trump administration and his visit was a chance to see how states are dealing with it at the ground level.

“The Department is all in, the President is all in,” he said. “He has such passion for this issue, because he knows the misery and the suffering that has occurred across this land, and wants to help, help solve it.”

Price points to the recent $3.1 million in funds — with more money on the way — being sent to New Hampshire as evidence of the administration’s commitment to getting more resources out into the field.

Yet, more funds are needed for the Granite State, which has the second-highest overdose deaths per capita in the country. Nearly 500 people have overdosed on drugs in 2016. New Futures, a nonprofit focused on the opioid crisis, released a report Monday that found substance misuse costs the state’s economy about $2.36 billion each year.

Sununu praised the White House for its “tremendous” effort in reaching out to the states to see what they think of certain policies and solutions to combat opioid misuse.

However, Democrats are blasting the U.S. House of Representatives’ passage of the American Health Care Act, which would make major changes to Medicaid expansion. Democrats argue that the bill would weaken funding for federal programs to battle the drug epidemic.

Just before Price and Conway’s arrival, protesters staged a “die-in,” laying on the floor in the hallways of the State House, holding up signs that said, “Trump lied, I died” and “I died for a billionaire’s caviar.”

Democrats held their own press conference while Price and Conway met with New Hampshire leaders, criticizing Sununu for holding a closed-door meeting.

Price said Trump is committed “to make certain that every individual has access to the kind of coverage that they want for themselves and for their family.”

“I think it’s important to step back and say is the Medicaid program the most appropriate program for every individual in that economic setting,” he added. “Is there a better way to provide coverage? Is there a better way to provide services? Whatever the answer to that is the president is committed and we’re committed to making certain every single American has a seamless transition.”

He vowed “that nobody falls through the cracks. That no rug is pulled out from anybody and that we make certain that the coverage and the care is available to every single American.”

Sununu said he had “some severe reservations” about the House’s health care bill, but he appreciates “the progress the House made.”

“We have to move that ball forward,” he said. I do have reservations in some areas when you look at the details. But people have to understand this is simply one part of the process. The Senate is going to go through their process. It shows that Congress isn’t stalled, not stagnated. They’re not going to do nothing. I think we’ve had eight years of a lot of do nothing. They’re doing something and they’re standing up for the American people.”

Conway said the opioid epidemic should be a bipartisan issue that Democrats and Republicans solve together.

“We look at this as a non-partisan issue in need of a bipartisan solution,” she said. “And we are working with people on both sides of the aisle in Washington and within each of the states to do exactly that.”

However, there are instances of disagreement between Republicans, especially on the American Health Care Act. It also appears that New Hampshire leaders and the White House aren’t always on the same page.

Price and Conway did not mention the national drug czar’s office during their visit. While New Hampshire is one of the hardest hit states of the drug epidemic, it appears an official from the state has not been invited to sit on the President’s Commission on Combatting Drug Addiction and the Opioid Crisis, leaving many to question how committed Trump is to fulfilling his campaign promise.

New Jersey Gov. Chris Christie is chairing the commission, and it was announced Wednesday that Democratic Gov. Roy Cooper of North Carolina, Republican Gov. Charlie Baker of Massachusetts, and former Democratic Rep. Patrick Kennedy of Rhode Island will also serve on the commission. Bertha Madras, a former deputy director of the Office of National Drug Control Policy, will also work on the commission, but no one from the Granite State.