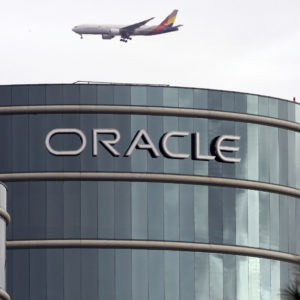 The Silicon Valley-based database, cloud and business software giant, second in sales to Microsoft, filed a petition with the FCC Wednesday requesting a rollback of the rules passed in October. The rules placed new limits on how broadband providers like AT&T and Comcast can collect data from subscribers and monetize it using targeted advertising.

“The [privacy] order correctly recognizes that protecting consumer privacy online is ‘fundamental,’ but completely undermines that goal by handing Google the market to the obvious detriment of consumers,” Oracle wrote in an agency filing.

The rules bar providers from collecting virtually any information from subscribers without their permission, including web browsing history or app usage, but only apply to companies providing internet connectivity. Edge providers like Facebook and Google, the dominant forces in targeted advertising, are outside of the FCC’s jurisdiction and subject to less stringent Federal Trade Commission rules.

“Google already has the ability to track virtually every movement of a consumer’s day through an Android phone or tablet,” the Oracle petition reads. “It has created a proprietary Android world to derive substantial economic benefit from advertising and – perhaps even more importantly – obtain access to huge amounts of personal data through search, location tracking, and other activities.”

This isn’t the first time Oracle’s gone after Google with specific regard to Android. The software developer lost a years-long lawsuit to the search giant in May. At the time it tried to sue Google for using Java application programming interfaces (APIs) in its Android OS. Oracle acquired the Java copyright in 2010.

“The Android license required to be obtained by [original equipment manufacturers] as a condition precedent to manufacture includes significant demands that severely constrain developers,” the filing states. “Moreover, because Google controls the distribution mechanism for apps, competition and consumers are further harmed. Google is largely outside the FCC’s authority, and now the commission has handed Google a new regulatory gift in the form of imbalanced burdens on ISPs [internet service providers].”

Oracle is likely to fair better against Google this time than it did in the courts. Democratic FCC Chairman Tom Wheeler, who passed the rules as an addendum to net neutrality along a 3-2 party line vote, will leave the agency in January along with another Democratic commissioner. Afterward Republicans will take the majority at the FCC under the Trump administration.

Both have already announced their intention to roll back net neutrality rules they previously opposed. Commissioner Ajit Pai, the favorite to take over as acting chairman, leveled criticism echoing that of Oracle before voting against the privacy rules.

“Search engines log every query you enter. Social networks track every person you’ve met. Online video distributors know every show you’ve ever streamed. Online shopping sites record every book, every piece of furniture, and every medical device you browse, let alone purchase,” Pai said in May. “And yet the FCC only targets one corner of the marketplace.”

“Selectively burdening ISPs confers a windfall to those who are already winning big in the world of online advertising,” he added.

The letter comes a week after executives from Google, Oracle and other top tech firms met with President-elect Trump in New York. Oracle co-CEO Safra Catz, who attended the meeting, has since joined the Trump transition team.

“I plan to tell the president-elect that we are with him and will help in any way we can,” Catz said before the meeting. “If he can reform the tax code, reduce regulation and negotiate better trade deals, the U.S. technology industry will be stronger and more competitive than ever.”