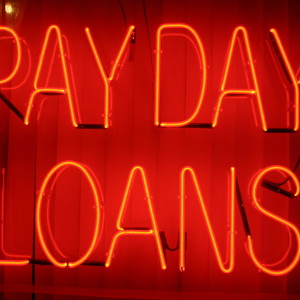 American consumers borrow nearly $90 billion annually in short-term, small-dollar loans (SDLs). The SDL industry — or “payday lending” industry — offers a short-term, unsecured loan (usually $500 or less) to borrowers who promise to repay the loan out of their subsequent paycheck or regular income payment. A payday installment loan, an alternative product, has the borrower repaying the SDL in equal payments over time. The Consumer Financial Protection Bureau estimates that the median size payday loan is $350.

Unlike an SDL, a traditional installment loan has the borrower, after successfully meeting the bank’s or credit union’s underwriting requirements, repaying the loan with equal payments over time. Due to the underwriting review process, from 40 percent to 60 percent of traditional installment loan applicants fail approval for credit assistance, and these rejected applicants’ demand for credit is often met by the SDL industry.

In a 2012 Pew Research survey, 70 percent of payday loan borrowers reported that they used their loans to cover recurring expenses, such as rent, groceries or other debt payments. There is also evidence that small-dollar lenders tend to congregate in local communities having higher rates of poverty, lower education levels and minority populations, reinforcing concerns that the SDL industry targets the most vulnerable in American society.

Loan pricing has attracted intense scrutiny of the payday lending industry, as it is calculated on a fixed dollar fee (typically $15 to $20 per $100 advanced for a two-week period). Because SDLs have such a short term to maturity, the annual cost of borrowing, expressed as an annual percentage rate, is nearly 400 percent.

It is, however, the lender fees that often “traps” the payday, installment loan borrower into an unending cycle of debt. The borrowers often pay outstanding fees and interest to keep the loan out of deficit status, finding themselves caught in a cycle of paying fees and interest while never actually reducing the loan’s principal balance. Yet SDL lenders are taking a high risk that the borrower cannot pay them back. To make loans, the interest received from the loans paid back by customers has to cover the SDL lender’s loan default expenses.

While the SDL industry is state and federally regulated, there is a major difference between a legally incorporated, small-dollar business and an unverified internet-only company who is marketing SDLs illegally (out-of-state and often offshore).

At the state-level, the National Conference of State Legislatures reports that as of May 2019, 37 states have statutes that allow for small-dollar lending, while 11 states do not have specific small-dollar lending statutory provisions and/or require lenders to comply with interest rate caps on loans. Only five states — Arizona, Arkansas, Georgia, New Mexico and North Carolina — and the District of Columbia prohibit small-dollar lending.

The majority of states authorizing small-dollar loans have APR loan interest rate caps in the 15 percent to 20 percent range.

The federal government regulates the interstate transactions of the SDL industry through the Consumer Financial Protection Bureau and the Federal Trade Commission. The CFPB regulates the SDL under the “2017 Payday Lending Rule” that governs certain personal loans by a lender that regularly extends credit to consumers primarily for personal, family or household purposes, with short-term repayment structures, for example within 45 days of consummation or an advance.

However, on June 6, 2019, the CFPB issued a final rule delaying the compliance date for the rule’s underwriting provisions until November 19, 2020, while it considers a rescission of this part of the rule.

The FTC enforces a variety of laws to protect consumers who are SDL borrowers. These include engaging in deceptive or unfair advertising and billing practices in violation of Section 5 of the FTC Act; failing to comply with the disclosure requirements of the Truth In Lending Act; violating the Credit Practices Rule’s prohibition against wage assignment clauses in contracts; conditioning credit on the preauthorization of electronic fund transfers in violation of the Electronic Fund Transfer Act; and employing unfair, deceptive and abusive debt collection practices.

The federal government has recently shown active support — including evidence of strong bipartisan congressional support — for encouraging traditional banking and credit unions to provide competitively priced, small-dollar loan products to compete with the non-traditional payday lending industry. In May 2018, the Office of the Comptroller of the Currency’s urged national banks and federal savings associations to offer shorter, small-dollar installment loans, following the final rule authorization in October 2017 by the CFPB to provide these types of loans.

Moreover, by broadening underwriting considerations, the Office of the Comptroller of the Currency argues that if banks offer these lower-cost, short-term loans to consumers with low credit scores, it can help bring these often unbanked consumers into mainstream banking and therefore avoid them being trapped in high-interest loans from payday lenders. Such underwriting considerations could include how long a customer has been associated with a bank and the regularity of deposits into their bank accounts, both important indications of a small-dollar loan customer likely to repay a loan.

As “fintech” applications continue to proliferate in the financial services sector, a greater share of underserved consumers will gain access to a wider variety of competitively priced digital financial services through mobile devices and computers. Small-dollar installment loans will process at much lower underwriting costs, with machine learning algorithms reflecting these broader underwriting considerations. Fintech technology will be equally useful to the for-profit and non-profit sectors offering SDL products.

In dealing with the regulatory problems associated with the SDL industry, no one solution will adequately address the complexity of issues related to the unbanked population and SDLs. However, innovative financial products available to an underserved population, coupled with increased price competition, will result in a welcome outcome: a likely reduction in the illegal, predatory component of the SDL industry.