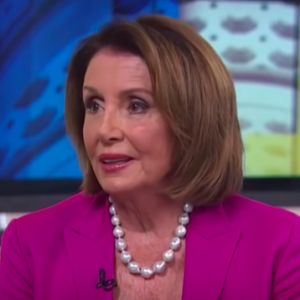 Pelosi Tells Democrats Running for House: “Do What You Have To” Now, I’ll Ask for Your Vote Later

Only one of the Democrats running in the First Congressional District primary have said publicly they will support Nancy Pelosi for Speaker of the House. But is it all just a charade?

In an MSNBC interview, Rep. Pelosi (D-CA) had a clear message for Democrats in tough house races like NH-01: Say whatever it takes to win today. She won’t ask you for your vote until after the election.

“I haven’t asked one candidate for a vote,” the former speaker said, before launching into a series of complaints about Republican TV ads making her an issue in congressional elections.

“I do not think our opponents should select the leader of our party,” Pelosi said. “Republicans are afraid of me because I outraise them in the political arena, because I outsmart them at the negotiating table, and because I’m a woman.”

“I say to [Democratic congressional] candidates ‘do whatever you have to do’– just win, baby!  We must win this. When the caucus decides, it will decide whose name to send to the floor [for the Speaker of the House position]. Only after the election will I ask people for their support,” Pelosi said.

So when Democrats like Chris Pappas and Maura Sullivan tell voters they aren’t backing Pelosi for speaker, are they being sincere? Or are they just taking her advice and doing “whatever they have to do?”

The GOP is convinced the Pelosi is one of their most powerful campaign tools.  Jesse Hunt, a spokesman for the National Republican Congressional Committee says “When Nancy Pelosi becomes a central part of the discussion in any race, that is something we’re winning on because we’re not just talking about her, we’re talking about her policies.”