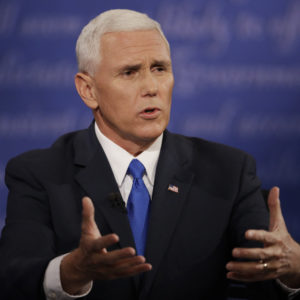 Pence Says He Supports Criminal Justice Reform. Does That Matter?

Tim Kaine and Mike Pence both want criminal justice reform, at least in theory. It was a rare topic of superficial agreement in Tuesday’s vice presidential candidates debate.

The question is whether issue positions on this subject can be believed from Pence, since the Republican misrepresented several of Donald Trump’s past statements throughout the forum — and whether any of these words will make a difference as the push for reform on Capitol Hill now looks imperiled at best.

Pence, the Indiana governor who with his running mate Donald Trump has pounded “law and order” rhetoric in the campaign, called Tuesday for “recognizing and correcting the errors in the system that do reflect institutional bias.”

“Congress is all out of excuses,” U.S. Justice Action Network executive director Holly Harris said in a statement after the debate, “the Republican candidate for Vice President, Indiana Governor Mike Pence, did not equivocate when he said, ‘we need to adopt criminal justice reform nationally.’ The Democratic candidate, Virginia Senator Tim Kaine, agreed on the need for this reform.”

There’s no reason to doubt the Democratic commitment to this goal. Presidential nominee Hillary Clinton has spoken about it often, decrying systemic racism, though she previously backed her husband’s 1994 crime bill, maligned by many on the left, and critics have attacked her use of the term “superpredator” as racist.

Pence and Trump have been quick to reject criticism of law enforcement. The governor said Tuesday that he favors “community policing,” a reform buzzword, and noted that he’d passed criminal justice reform in his state.

At the same time, he also condemned “bad mouthing that comes from people that seize upon tragedy in the wake of police action shootings as — as a reason to — to use a broad brush to accuse law enforcement of — of implicit bias or institutional racism.”

He also defended the controversial “stop and frisk” policing policy, which Trump has embraced.