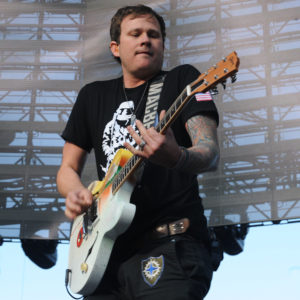 The newest emails between the two dumped by WikiLeaks reveal talks between Delonge and top television and Hollywood studios including Scott Free, founded by director Ridley Scott and credited with the recent sci-fi blockbuster “The Martian,” Allison Shearmur, producer of the next installment in the Star Wars franchise “Rogue One: A Star Wars Story,” director Ron Howard’s Imagine Entertainment, Netflix, Amazon and VICE News for a fictional television series based on his recently published novel “Sekret Machines: Chasing Shadows,” the first of nine planned books “that will reveal fascinating secrets surrounding the true, well-documented events of Unidentified Aerial Phenomenon,” according to the description on Amazon.

“Like everybody else I meet with, their faces drop halfway through the meeting and can’t believe that I am spearheading a project that has support from the shadows,” Delonge wrote. “The execs were again, blown away.”

The Feb. 23 email from Delonge to Podesta said Scott Free and director Steven Spielberg’s DreamWorks, revealed to be in talks with Delonge from a previously leaked email, were still digging through the novel. The guitarist also mentioned a multi-episode non-fiction documentary in the vein of Netflix’s highly-acclaimed “Making a Murderer,” for which Delonge presumably interviewed Podesta, according to an already disclosed email, but said they would have to finalize a production studio before moving forward with VICE, HBO, Netflix, or Amazon.

“I have an Amazon meeting and VICE News in next 2 weeks. Amazon, Netflix [which Delonge said wanted a “company-wide meeting on the project] are biggest TV studios now and doing the most prestigious shows, actually,” the Blink-182 founder wrote. “VICE News just raised $300 million to start doing fictional television based on non-fiction. Sounds like our model.”

In that and an earlier Feb. 16 email to Podesta, Delonge described plans he outlined with Rolling Stone for a two-part story revealing the project, the first of which was presumably published on April 27, with a second story to include a video trailer for the documentary and the foreword of a novel written by the Angels & Airwaves frontman.

“We like Rolling Stone, right?” Delonge wrote before asking Podesta to recommend reliable reporters at other outlets for follow-up coverage including Leslie Kean, a noted UFO enthusiast in contact with the Clinton adviser per more emails.

“I have gone through rules with all advisors on what can and can not be said,” Delonge wrote in reference to the Rolling Stone article on Feb. 23. “It will be tricky, because they will want to know what kind of support I am getting, and I can not and will not say anything to them — but they should get the idea that this is important and real.”

In the April 27 article following Delonge through his California-based Into the Stars production headquarters, the guitarist said the information for his multimedia effort comes from “sources within the aerospace industry and the Department of Defense and NASA.”

“That sentence, specifically, was approved for me to say,” he told the magazine.

While mainstream and social media have frequently made a joke of his obsession, the Podesta email dump by WikiLeaks –which Delonge believes will help prove the existence of UFOs — purportedly demonstrate at the very least his ability to use his celebrity status to make connections in government.

“Mr. Weiss from Lockheed SkunkWorks just emailed me asking if there were any updates,” Delonge wrote. “I am not expecting much, but if there is anything I can tell him and the General, however small, I would like to respectfully pass it along.”

Weiss previously said 80 percent of the work on advanced development programs Skunk Works does for the DOD is classified — work that includes the aviation-legendary U2 high-altitude, long-range surveillance and reconnaissance jet the SR-71 Blackbird (holder of the world record for fastest air-breathing manned aircraft since 1976), the F-117 Nighthawk stealth ground-attack aircraft and more recently, the F-22 and F-35 fifth-generation stealth fighter jets.

A new email dump Thursday has Delonge reporting to Podesta meetings last fall “with current Commanding Officers at the Air Force Space Command,” and earlier emails revealed those advisers include retired Maj. Gen. William N. McCasland, former commander of the Air Force Research Laboratory at Wright-Patterson Air Force Base, where Delonge claims pieces of the UFO that some believe crashed in Roswell, New Mexico in 1947 were sent.

The Sept. 24 mail from last year includes recommendations from McCasland for a “White House memo,” possibly referencing a future Clinton administration, with instructions for divulging information in coordination with DoD, DNI [Director of National Intelligence] and NOAA [National Oceanic and Atmospheric Administration].”

“The General (from Wright Patt R&D) and I talk every other day,” Delonge wrote in the Feb. 23 “Updates” email. “He and I talked on the phone the other night and he is excited, he really thinks that the DOD is going to embrace my project because I am out to show all the positive things great people have done on this topic.”

“It’s easy to poke fun about the topic from an armchair, but unless you’re invited to the meetings I have been a part of, then…no more laughing,” Delonge wrote in a Friday Instagram post. He followed up with two posts Monday showing a view of the White House from a hotel window and another of the guitarist walking in front of 1600 Pennsylvania Avenue.

“Great meetings here in DC. Just a one day trip across the country… to talk about stuff.”