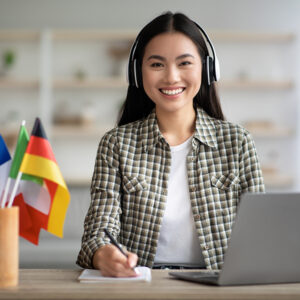 POINT: Foreign Language Study Is Desirable, but Not Essential

Posted to Education October 08, 2021 by Jenna A. Robinson

Editor’s Note: For another viewpoint, see COUNTERPOINT: Skip Foreign Languages at Your Own Peril.

University students of yesteryear read the classics. Aristotle, Euclid, Homer, and Plato were part of the regular course of study. And students read these challenging texts in their original languages — Greek or Latin. The Latin they learned in order to read the classics had many second-order benefits. Half of our English vocabulary comes from Latin words and roots. Science, technology, medicine, theology, philosophy, and law use Latin extensively.

To its detriment, the modern university has mostly abandoned this model. Only a few classic works are still required as part of the general education curriculum at most universities. And these days there are plenty of excellent English translations to choose from. Nobody bothers with Latin anymore, let alone Greek.

Instead, there is a generic foreign language requirement: a sad vestige of this old system. Students typically must take (or test out of) three semesters of any foreign language they choose. And no one cares whether it is wholly disconnected from the rest of the general education curriculum or a student’s chosen major. Why bother?

Conventional wisdom claims there are great benefits to learning a foreign language. It can help with memory as well as a student’s understanding of English grammar and vocabulary. It can enhance students’ ability to multitask. And it can improve student performance in other subjects.

But it isn’t clear whether these benefits are truly lasting. A recent meta-analysis of bilingual education, appearing in Psychological Bulletin, concluded that “available evidence does not provide systematic support for the widely held notion that bilingualism is associated with benefits in cognitive control functions in adults.”

But even if there are great benefits of bilingualism or from the lifetime study of Latin that was once common, they have little to do with current campus practice.

Today’s three-semester requirement is not a serious effort to encourage bilingualism. The first three courses in any foreign language are necessarily very elementary. In them, students will work on basic vocabulary, regular verbs, and simple sentences. Almost everything will be in the present tense. And that’s only if students are studying a language that uses the Latin alphabet. Three semesters of Mandarin Chinese, or any other language with a foreign alphabet, is barely scratching the surface.

And in a world of Google Translate and Duolingo, the practical advantages of learning a little bit of conversational French or Spanish in college aren’t what they used to be. Anyone who wants to learn basic travel expressions and phrases to help them navigate a continental vacation can easily do so in a few weeks on the internet.

Many students enter college woefully ignorant. They have not read the Great Books. They don’t recognize or understand the American system of government. They are unfamiliar with the scientific method. They don’t have the habits of mind that engender lifelong learning. And employers report that recent college graduates are often deficient in oral and written communications skills — in English!

Any courses that contributed to a common, basic level of cultural literacy would be more valuable than third-semester German. And courses that add to job skills — such as statistics, logic, or public speaking — would help students far more than most foreign languages.

The goal of general education requirements should be to create a broad foundation of knowledge and understanding that acquaints students with “the best that has been written and said” and prepares them for further study. While desirable, the skills conferred in foreign language courses aren’t essential for understanding what makes us all human, for liberating the mind, or for making meaning of the world. Nor are they good preparation, in most cases, for students’ majors.

Universities must prioritize which courses students should take — and foreign language doesn’t make the cut.

Jenna A. Robinson is president of the James G. Martin Center for Academic Renewal in Raleigh, N.C. She wrote this for InsideSources.com.