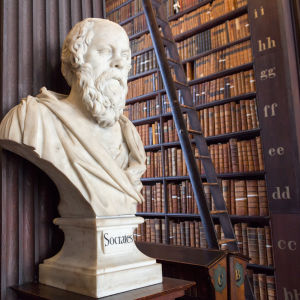 Editor’s Note: For an alternative viewpoint, please see: Counterpoint: Why the ‘War’ on College Is Justified

One thing that all too many Americans have in common these days is a loss of faith in higher education. The Pew Charitable Trusts’ most recent survey of Americans’ views of national institutions showed that in the last two years a majority of Republicans had come to believe that colleges no longer had a positive effect on the country’s direction.

The fact that confidence in higher ed among Democrats increased should provide little comfort, for even here the trend is disturbing. When attitudes toward universities become one more symptom of our partisan divide, the very mission of universities is undermined.

On the right, the condemnation of “tenured radicals” is a staple of stump speeches, but this criticism is nothing new. During the Vietnam War, conservatives looked at colleges as breeding grounds for radicalism that undermined core American values. During the culture wars of the 1980s and 1990s, higher education was accused of being responsible for the “closing of the American mind,” as students and professors alike were said to be turning their backs on enduring questions in favor of the posturing of the moment.

And now, President Trump and his advisers express satisfaction with changes in the tax code harming elite universities because they see these institutions as “playpens of the left.”

Even educators who identify as liberals can’t help becoming critics of the culture of higher education. This fall, Columbia professor Mark Lilla famously complained that campuses were controlled by social justice warriors who were more concerned with ideological purity than they were about making genuine civic contributions. And self-styled progressives on campus are quick to dismiss programs aimed at increasing equity and inclusion as just public relations ploys by administrators hoping to burnish the brands of their neo-liberal universities.

Higher education has become an appealing target for liberals and conservatives who claim to be concerned with political correctness, free speech or simply the failure of young people to act like old folks remember acting when they were young. Attacking political correctness or group think at universities is by now, at best, a vapid, smug way of piling on — a signal of one’s willingness to be a contrarian while saying nothing with which anyone would disagree. At worst, PC bashing is just a cover for persistent bigotry.

Today’s “war on universities” is a symptom of our polarized public life. The “you’re either for us or against us” attitudes that are so prevalent deny the possibility that one can engage in honest inquiry without knowing the answers in advance. These attitudes have resulted in self-satisfied cynics (on the left and right) showing only condescension toward teachers and students willing to consider alternative, complex responses to enduring issues or contemporary problems.

Higher education depends on this willingness to find unexpected answers, to develop stimulating interpretations of perennial questions. It depends on not letting partisan opinion completely control inquiry. That’s why we are seeing increased attention at universities to the cultivation of intellectual diversity, offering a wide variety of resources to undergraduates to expand their capacity to confront problems and create opportunity.

Students today know what they’re up against. Issues I hear them talking about the most are slowing economic growth, climate change and increasing inequality. They are well aware that the world they will be entering after graduation is one in desperate need of creative approaches to political and economic challenges that earlier generations failed to address adequately.

The alternative to learning, to experimenting with other points of view and new domains of inquiry, is increasing partisanship and close-mindedness. We are already seeing this in very public refusals to listen to people with contrary views; in the rejection of basic science; in the petty nastiness that comes from the resentment that other people are learning something you don’t know. But such attitudes are more prevalent in government than they are on campus.

Our colleges and universities thrive when they acknowledge viewpoint diversity as an essential ingredient for productive learning. This acknowledgment has for years fueled efforts to expand access for students from under-represented groups. By joining this continuing work with inclusive, bold and rigorous inquiry, we can ensure that American universities cultivate individuality as well as social sympathy, that they preserve what is best in our culture while stimulating pragmatic inquiry for the sake of social progress.

Higher education should never be uncontroversial, and for that very reason it deserves our respect and support.

Michael S. Roth is the president of Wesleyan University in Middletown, Conn. He earned his undergrad degree from Wesleyan and his doctorate from Princeton. His book “Beyond the University” has been a powerful tool for students, their families, faculty and policymakers who are wrestling with the future of higher education in America.